Samsung pulled a fast move, and has confirmed they are working on a watch to rival the Pebble smart watch. Better yet, this can be a bigger rival to Apple’s rumored iWatch, which Samsung announced before Apple could even confirm the details of the device.

Samsung released the S9100 watch back in 2009, so this wouldn’t be the first time Samsung will be working on a smart watch. It’s being rumored Samsung will call the new smart watch ‘the S Watch.”

The S Watch, will feature a 500×500 touch screen display, a built MP3 player, instant messaging, music playback and will be network connected.

Samsung hasn’t denied any of the rumors. I’m sure we’ll see more leaks on the iWatch rival soon. 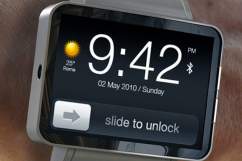 Apple’s iWatch Could Launch This Year