What is Bitcoin and why is it the only thing techy-finance people have been talking about over the past few days? Bitcoin is a digital currency, essentially like the bills in your pocket … except there are not bills. Everything related to Bitcoin (references to the system are capitalized) is completely virtual. It allows users to exchange bitcoins (references to the actual currency are lowercase) for goods and services, just like real money. However, Bitcoin is an alarming, intriguing, bizarre and revolutionary service that may be the future of currency. Here are 10 facts you need to know about Bitcoin (and bitcoins).

1. It was Invented by Satoshi Nakamoto, Who Doesn’t Exist
Bitcoin was created Staoshi Nakamoto, a psuedonym, back in 2009. Almost no one in the world knows the actual identity of Staoshi Nakamoto and only a handful of longtime Bitcoin users have actually chatted with the developer. Interestingly, in April 2011, Nakamoto disappeared from the Internet, saying he had moved on to “other things.” Both Fast Company and The New Yorker launched investigations to find who Nakamoto actually was, but both reports were inconclusive.

2. Bitcoin is Blowing Up
Bitcoin has experienced a meteoric rise in the past few months. In January 2013, Bitcoin was valued at $15 per one bitcoin. In early March 2012, Bitcoin was valued at $35 dollars per one bitcoin. Now, the exchange rate has skyrocketed to $141 dollars per bitcoin. This has drawn the attention of many analysts, especially on Wall Street. According to Business Insider, hedge funds could be moving in to the Bitcoin market. While they haven’t yet, analysts predicted that hedge funds could be interested in buying up a “small” stake in Bitcoins. Similarly, two Wall Street researchers published notes regarding Bitcoin in the past few weeks. One said that a client of his asked about Bitcoin, which was the first time he was asked about Bitcoin. Another predicted why Bitcoin keeps rising (which we’ll get to later).

3. There Are Various Reasons Why Bitcoin Keeps Rising
Obviously the rise of Bitcoin caught the attention of some major players. ConvergEx Group Chief Market Strategist Nick Colas published a note that we mentioned earlier, where he talked about why Bitcoin was rising. Some reasons include:

Lots of people around the world are uncomfortable with central bank policies, which seem to give money away to a global banking system which remains fundamentally broken

Some analysts believe the turmoil in Cyprus spurred Bitcoin’s surge, while others debunk the claim.

4. Many Think Bitcoin is Just Another Bubble, Like the U.S. Housing Market or the Late ’90s Internet Bubble
Colas’ note said that many think that Bitcoin is another bubble, though:

The reaction from clients has been pretty uniform: it must be a bubble. Too far, too fast, too new … you get the idea. Moreover, it’s very hard to short Bitcoins, so there’s no real way to express that pessimistic point of view, which is saving a lot of people some real money, since Bitcoin has some solid momentum just now.

5. Bitcoin is Unregulated
What does that mean exactly? That means there’s no government body supporting the currency. Forget governments; there isn’t even an organized central body. No one. Because of that, it’s been difficult for many to understand Bitcoin or take the currency seriously. Unregulated currency is one of the biggest fears for those who study economics. Take this hypothetical scenario: In June 2013, Bitcoin rises up to $500 per unit, and those who invested in Bitcoin decide to sell. It becomes a domino effect and more and more people start selling their investments in Bitcoin as the exchange rate tumbles. Then, for those actual Bitcoin users, their currency has suddenly depreciated to $50. Without regulation, it’ll be difficult to put safeguards in place that can prevent this kind of disaster, which (usually) won’t happen to fiat currencies backed by a government and a treasury.

6. How Can I Get Me Some Bitcoins?
Originally, you could earn bitcoins — or “mine” bitcoins, as users say — by using your computing power to solve complex mathematic problems. However, now that Bitcoin has become so popular, it’s effectively impossible to earn bitcoins in this manner. The other method is to go to a website (like this one) and use cash to purchase bitcoins, which can get expensive.

7. Dozens of Companies Accept Bitcoins
The list of companies that accept Bitcoin payments keeps growing by the day. Some major companies are planning on accepting bitcoins in the near future as well, including Amazon, Western Union and OKCupid. Business Insider reported that a Texas family sold their 2007 Porche Cayene S for 300 bitcoins, or $39,000 (minus the 0.99 percent transaction fee). I’m sure that they’re hoping the price of bitcoins keeps rising.

8. Governments Are Starting to Take Notice
A few days ago, the Financial Crimes Enforcement Network, FinCEN, announced it would be creating regulatory guidelines for “virtual currencies,” clearly because of Bitcoin. The Bitcoin Foundation didn’t appreciate the regulation, with Patrick Murck saying that it was an “overreach” and that FinCEN “cannot rely on this guidance in any enforcement action.”

9. There Are Some Privacy Issues with Bitcoin, Too
Bitcoin transactions are largely anonymous, so it’s really difficult to get your money back. Not only that, but Bitcoin is involved in some of the shadier areas of the Internet. According to The Atlantic, Bitcoin is largely used for transactions with Silk Road, an online black market where users can buy drugs and other illicit materials.

10. Bitcoin is One of the Riskiest Investments You Could Make
I’m a little apprehensive of Bitcoin. The concept is sound, but the infrastructure seems to be unstable. Just today, Bitcoin fell from $145 to $118 and counting. There’s no way to make sure that these kinds of drastic drops won’t happen, which means people could lose fortunes. There are also rumblings about Bitcoin being susceptible to cyberattacks. When in doubt, I’ll always trust a fiat currency with the backing of a government over a decentralized, volatile, and extremely risky online currency. 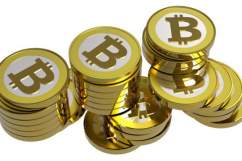 Alberta Man Attempts to Sell His Home For Bitcoins