As WWDC gets closer, Apple is ramping up internal testing for iOS 7, and we’ve noticed increased traffic from devices using the still-unannounced iOS 7.

The rumors about iOS 7 have been reaching a fever pitch and more and more reports keep leaking about the Apple-only operating system rumored to be unveiled at WWDC 2013 in less than a month.

Here’s what TechCrunch said Onswipe noticed in its traffic statistics:

Over the past week, Onswipe found a significant bump in the number of visits from iOS 7 iPhones and iPads, specifically located in both Cupertino and San Francisco. SF had the most iOS 7 visits, with 18.75 percent, and Cupertino accounted for 17.9 percent of the total…Most were visiting from iPhones (75 percent), but iPads also represented a full quarter of visits.

But, we’ve noticed the same thing at Heavy as well. As you can see from the graph above, traffic to Heavy from devices using iOS 7 has been steadily increasing over the past few months. This is pretty concrete evidence that iOS 7 not only exists, but it also shows that Apple is ramping internal testing for iOS 7.

Sites like AppleInsider and MacRumors have noticed increased traffic from iOS 7 devices too. The first reported spotting of iOS 7 traffic was back on January 1, according to The Next Web. We noticed traffic dating back to December 2012, and it has been sporadically increasing and decreasing over the past few months, until the recent spike.

It’s definitely a good sign, following the rumors that iOS 7 would be delayed because Jony Ive — the new head of iOS development at Apple after Scott Forstall’s ousting — instituted so many drastic user interface changes that he brought over developers from the OS X team to get it ready to unveil at WWDC 2013 in June. 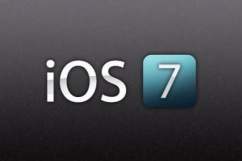 Read More
Apple, iOS 7, iPhone 5S, Technology
Rumors about iOS 7 getting delayed can be squashed for now, cause we've noticed a spike in traffic from iOS 7 devices.