Since WWDC 2013, one of the big Apple products speculated for a fall release was a cheaper version of the iPhone 5.

The phone has yet to be confirmed by Tim Cook’s company but was projected as a lower cost alternative for buyers, which was essentially a “budget iPhone.” Apple has yet to confirm any of the new products on its fall slate, but customers can get excited because a surprise may be awaiting them on Amazon.

The online retailer has a section devoted to plastic shells meant for the iPhone 5C. While this isn’t the official name for the next version of the iPhone, the page on Amazon specially mentions that is what the case is meant for.

Titled as the Elago S5C Slim Fit 2, the selections vary in the cost of the order. The black, navy and white items will be in stock either August 23 or August 26. The prices are different for each order as well. CNET notes that the regular price will be $9.99 while the special editions are $23.99.

This adds more fuel to the rumors about this phone from earlier this week. Apple supplier Pegatron has been accused of labor violations and the investigation discovered the alleged plastic cases for these phones. While the dimensions of these cases indicate they’re meant for a slimmer phone, this may hardly be the case. Designers have leaked early sketches of shells that turned out to be untrue. While this is definetly something to watch, I don’t advise making a purchase yet unless Apple acknowledges these are official. 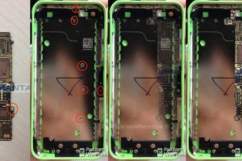