This is just one comment that surprised Siri users today when asking about Google Glass. (The Verge)

Siri has thrown down the gauntlet for Google Glass. The digital assistant surprised a few users today when being asked about the search company’s new wearable computer. Famous for delivering quirky comments before, this is the first time Siri has directly addressed a competitor.

Apple has yet to explain why they added this command for Siri. (Techno Buffalo)

Delivering a few well placed burns, iPhone owners have to input “Okay, Glass” as a trigger phrase. These responses range from witty and clever to just downright dull.

Twitter user @seanmbrage is considered to be the lucky one who discovered this funny new feature. Once he posted what he found, more users replied with their various responses, sparking a new war to top each other with the most sarcastic sayings. Reports also indicate that iOS 6 users can get these comments, but those holding the iOS 7 Beta will get more.

Apple CEO Tim Cook has made it clear in the past he wants to explore the area of wearable tech but hasn’t commented on this update to Siri. While this was all in good fun, we may see competition between both tech titans heat up in earnest this winter.

Test this command out on your phone and comment below with what you find! 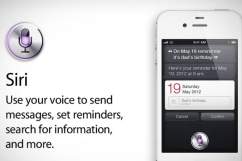