The rumored iPad 5 could have the new space grey color Apple introduced for the iPhone 5s. (Sonny Dickson)

Sonny Dickson, the infamous leaker who produced “leaks” of early iPhone 5s & iPhone 5c designs, claims to have the actual designs for the new iPad 5. This is the first time we’ve heard from the blogger since Apple announced its next set of smartphones a few weeks ago.

These are supposed to be the internal specs of the new silver iPad 5. (Sonny Dickson)

This specific hue was introduced for the iPhone 5s but now is part of the iPod series.

These are supposed to be both of the new iPads in their different colors right next to each other. (Sonny Dickson)

Apple is rumored to launch the iPad 5 & iPad Mini 2 at an event on October 15th. Although these pictures don’t reveal much, it makes sense for Apple to continue this color scheme on the next line of tablets.

The next-gen iPad is supposed to have taken cues from the iPad Mini line with thinner specs and smaller features. The device should be substantially slimmer and could released simultaneously later this year. 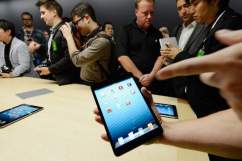