One of the top new features of the iPhone 5S is the Touch ID. With the phones hitting stores this friday, Apple stores will be launching a new demo app to test out the brand new feature according to 9to5mac.

After the keynote last Tuesday, Apple tested out the sensor with the crowd of journalists in attendance but the company needed to come up with a demo app to teach customers how to utilize this feature as they swarm to stores this Friday. 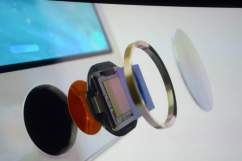 The program will be embedded in iPhone 5S’s found on the floor of Apple Stores on September 20th If this is true, the app will guide customers through the set-up process. First, a prompt would appear on the floor models asking to have a finger placed on the home button. Place the same finger on the button again ensuring the recognition would work. The last command would be telling customers to place another finger on the home button to emphasize how the program won’t recognize a new signature.

The application is supposed to reset itself so different customers could keep trying it out. Although it does not support the full functionality of the actual machine, the app is supposed to clarify the setup process for the most buzzed about new addition to the iPhone 5s.