Elon Musk may have officially become the real life version of Tony Stark.

The celebrity CEO appears in this video posted on the SpaceX youtube channel showing off the first version of his Iron Man inspired design lab. In the famous series of Marvel films, Robert Downey Jr.’s character utilizes holographic technology to help build his series of new suits. Operated by hand, 3D images appear on screen as Tony Stark mixes and molds designs to fit a new creative vision for his arsenal of armors.

In this video, Musk has brought that technology to life with his new design lab. Harnessing a Leap Motion controller to manipulate 3D designs to help with the development of new rocket parts. While this demonstration does seem as if it was ripped straight from a sci-fi film, the most amazing aspect of it is that all of the technology that was used exists today. The businessman embraces 3D printing to bring his models to life while the Leap Motion gesture controller can be purchased online. For skeptics who feel that 3D printing will never be a valuable commodity, Musk just proved you dead wrong. Let us know what you think of this wild new invention in the comments section below. 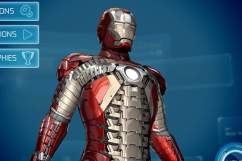 Real-Life Iron Man Suits Are Coming Soon: Why You Need to Watch This Video