The iPhone 5C & iPhone 5S will be available tomorrow to purchase. The 5C has been well received so far with these critics giving positive marks for various features including the camera and battery life. Here are the top ten reviews you need to read before you buy the iPhone 5C.

You’ve seen this phone before. Sure, it has a new name: iPhone 5c. And its plastic body comes in different colors. It also has an attractive price when tied to a wireless contract.
But the 5c is really a slightly improved iPhone 5, which Apple is no longer offering.

This doesn’t make it a bad phone. Quite the contrary: I’ve been using the new iPhone 5c for the past five days and it’s a solid premium phone. Its hardware improvements include longer battery life, better cellular-data capabilities and a better front-facing camera, for FaceTime and “selfies,” or photos you take of yourself.

The good:The iPhone 5C is available for $99 or less on contract, and in five bright colors. Compared with the 2012 iPhone 5, it’s got more widely compatible global LTE coverage, an upgraded front-facing camera, and slightly better battery life.

The bad: This phone is 2012 tech dressed up in a brighter package for 2013; the four-inch Retina Display feels small compared with most Android phones.

Of that second new model, the iPhone 5c may have a cheap price, relatively speaking, but there is nothing cheap about the phone. Plastic be damned — the phone feels good in the hand. Apple says it is built around a steel frame that doubles as an antenna. And, yes, the color designs — my test unit is blue — look cool, too, complemented by matching wallpaper.

Get past the polycarbonate and you’re on familiar territory with the iPhone 5c. In fact, inside it’s pretty much the same as the outgoing flagship, which means you get the Apple A6 chip and 8-megapixel iSight camera. One important difference is in the connectivity: WiFi a/b/g/n (2.4/5GHz) – though still not 802.11ac – is included, as is Bluetooth 4.0 LE, but the iPhone 5c follows the iPhone 5s in boosting LTE support to as many as 13 bands per handset.

It’s the technology from the iPhone 5 stuffed into a plastic shell — available in five vivid colors — with a few minor updates such as a better front-facing camera and a heftier battery. For all the ways in which the 5s has a technical edge over the 5c, there are only a couple of great big immediate benefits you give up by choosing the 5c:. It doesn’t have Touch ID, and it doesn’t have the improved camera with the better sensor, smart flash and slo-mo mode.

In front, the iPhone 5c is all glass with an improved 1.2MP front-facing camera, earpiece and sensors above the screen and the home button below. The Retina display is the same excellent 4-inch, 1,136 x 640-pixel (326-ppi) IPS panel that’s used on the iPhone 5 and 5s. As ever, it’s bright with accurate colors and wide viewing angles. Flip the handset over and you’ll see the familiar iPhone layout, with the rear shooter, secondary mic and single LED flash clustered in the top-left corner. It’s the same 8-megapixel camera (BSI sensor, f/2.4 AF lens) under sapphire glass that debuted with the iPhone 5 last year. Apple’s logo adorns the top tier of the back and the word “iPhone” and regulatory info occupy the bottom tier.

The iPhone 5c doesn’t actually feel like plastic. It’s strange when you first pick it up, but it almost feels like ceramic or a similar material that is glossy and hard. The manufacturing process that Apple used to make this phone and the metal reinforcement it used in the plastic casing certainly worked on making this phone tough.

Here’s something I think many of you will be happy to hear: In my experience, the iPhone 5c got better battery life than the iPhone 5 during general usage. On average, I got around a day and a half of standby, with between 6 and 15 hours of actual usage depending on my activity mix (more HD video streaming towards the lower end).

The budget model, the new iPhone 5C, comes in five colors ($100 for the 16-gigabyte model with a two-year contract, $550 without). It’s essentially identical to last year’s iPhone 5, except that its back and sides are a single piece of plastic instead of metal and glass.

Powering the iPhone 5c is the A6 chip found in the iPhone 5. It’s still noticeably faster than the iPhone 4’s A5 processor and, with the iOS 7 update, the difference is even more obvious. The 5c multitasks with ease and whizzes through the UI. 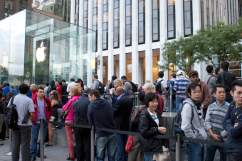