Popular product reviewer for The New York Times will be leaving the newspaper to join Yahoo. Here are five fast facts you need to know.

1. Pogue Will Prepare A New Consumer Technology Site For Yahoo

While the journalist is a well-known media presence when it comes to technology, he will be taking his brand over to Yahoo to create a completely new site focusing on consumer tech. His split from the paper has been amicable so far. Pogue’s tumblr page indicates he will perform the same duties as he had the paper. Pogue will publish the usual amount of blog posts and reviews as well as produce his usual selection of videos.

10 top time-saving tech tips | David PogueTech columnist David Pogue shares 10 simple, clever tips for computer, web, smartphone and camera users. And yes, you may know a few of these already — but there's probably at least one you don't. TEDTalks is a daily video podcast of the best talks and performances from the TED Conference, where the world's leading…2013-04-26T15:20:46.000Z

Elaborating on his departure, The Wrap notes that Pogue likes a startup environment and that his team has big plans at Yahoo. He feels that Marissa Mayer has done an excellent job in morphing the company into an impressive media hub.

3. David Has Been With The Paper For 13 Years

David Pogue's Windows 8.1 Hands-on Review | The New York TimesThe Times's David Pogue weighed in on the updates to Microsoft's Windows 8 operating systems, one of which is designed for desktops, the other for tablets. Read the story here: http://nyti.ms/GSfpge Subscribe to the Times Video newsletter for free and get a handpicked selection of the best videos from The New York Times every week:…2013-10-17T12:03:47.000Z

His “State of The Art” column has been an essential part of the Business page since 2000. The articles typically consist of goofy product reviews spoofing the latest gadget that has come out or basic columns critiquing the latest trend in tech. His editors have issued a statement saying “He Will Be Missed.”

4. The Writer Will Keep His Other Speaking Engagements

Pogue appears on a few other TV shows to offer insight into everything tech. (Getty)

The multi-tasking wordsmith will still appear on several TV shows as a valuable source of info on everything tech. He’ll help with specials for the PBS show NOVA as well as CBS’s Sunday Morning talk show.

5. No Name For The New Site

Yahoo has not issued a statement welcoming the writer into the fold but his reputation is more than enough to generate some serious traffic to his site. Pogue has received some criticism for how close his reputation is with some of the companies who send him their products but he has become a famous tech evangelist. We’ll update you once the site is made public but the New York Times just lost a crucial part of their business section. 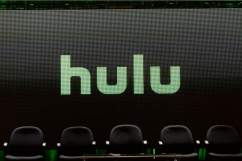