There are all kinds of rumors going around about the iPhone 6’s advanced battery life. Here’s what we know so far.

Is Apple moving into #solar power in a big way? http://t.co/wGvQf7c9vq

Forbes has suggested that there is evidence that the iPhone 6 will be capable of on-the-go charging, thanks to solar cells. It is possible that Apple will launch the iPhone 6 with sapphire glass screens, which could have embedded solar cell channels. If your battery got low, you could conceivably place the iPhone 6 in a sunny patch on your desk and watch it charge.

Here's an idea, don't make it thinner. Make the next iPhone thicker and give me a battery that lasts all day. http://t.co/WBHYKkKQtl

Ubergizmo makes the valid point that iPhone users dislike the phone’s limited battery life. The iPhone 5s has a 1,560mAh battery, which is nothing compared to some Android phones that pack a 3,300mAh battery. Apple is expected to increase battery size for this very reason…assuming the phone doesn’t also have solar charging technology, which would enable the device to have a smaller battery and a thinner form factor.

A massive battery capacity doesn’t mean anything at all unless the battery is also capable of rapid charging. Forbes argues that the iPhone 6 will need to offer rapid battery charging in order to stay competitive with Android phones.

According to a report in the Australian edition of the International Business Times:

5. The Battery May Not Get a Significant Boost After All

Hey Apple, l have an idea for the iphone 6! PUT A BLOODY BATTERY IN IT! Mine has the life span of a butterfly!

CNET pegs the chances of an iPhone 6 having improved battery life at around 35 percent. The consumer’s best bet for better battery life with an iPhone 6 may be to adjust settings, such as screen brightness and auto-lock. This could help extend battery life. 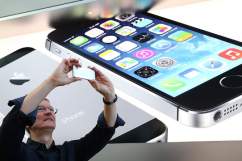 Read More
5 Fast Facts, Apple, iPhone 6, Rumors, Smartphones
There are all kinds of rumors going around about the iPhone 6's advanced battery life. Here's what we know so far.