Both the Samsung Galaxy Tab Pro 8.4 and the iPad Air are premium tablets. Both tools are powerful, are roughly the same size, cost roughly the same, and are both designed to be used without a stylus.

Should you hold out for the Samsung Galaxy Tab Pro 8.4, or pick up the slightly older iPad Mini that originally came out on November 12, 2013? Here’s a guide to help you pick the best tablet for your needs!

It might seem odd to compare camera quality on these two tablets. However, the camera quality was one big gripe Digital Trends reviewer Jeffrey Vam Camp had with the iPad Mini with Retina display, especially since the camera wasn’t a noticeable step up from the 1st gen iPad Mini. The iPad Mini has a a 5-megapixel rear camera with an F2.4 aperture, and a 1.2-megapixel front camera.

So, if you’re the sort of tablet user who prefers to use tablets for video communication or photography, these camera concerns might be valid to you.

While both tablets have a suite of productivity tools that make them excellent for office work, it’s worth noting that the Tab Pro 8.4 lets you actively use two app windows at once. The Tab Pro also boasts the Magazine Home interface, which allows you to customize multiple dashboards: a great way to prioritize your most useful apps and feeds.

While some might argue that the App Store has the better library of tablet-specific apps and games, the Samsung offering is superior in terms of multitasking for busy professionals. Apple’s often-lamented Siri assistant just isn’t helpful enough to balance out same-screen multi-tasking.

The Samsung Tab Pro 8.4 comes with a couple of nice perks. These include a $25 Google Play credit, 3 free months of Hulu Plus, 50GB of Dropbox storage, and even Gogo Inflight Internet access, according to Samsung‘s website.

iPad Mini customers recently had a chance to get $75-$100 gift cards during the holidays, but that promo seems to have ended, making the Tab Pro even more appealing.

Samsung says the Tab Pro 8.4 can offer users up to 10 hours of Internet time, which is roughly comparable to the iPad Mini. These devices are pretty evenly matched when it comes to battery life, size, and price.

However, there is a lot to be said for the Tab Pro 8.4’s superior multi-tasking abilities, camera specs, and perks package. If you truly have no preference about the operating system, then the Tab Pro 8.4 is probably the way to go.

While the iPad Mini with Retina display is out now, you’ll have to wait until February 19 to get your hands on a Galaxy Tab Pro 8.4, according to Tablet Monkeys. 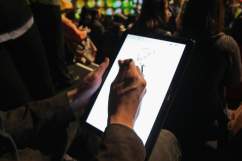