The Moto 360 smartwatch drops this summer, and runs on Android Wear. Here’s what you need to know about this gorgeous watch.

1. Moto 360 Will Be Released This Summer

While no official launch date for the Moto 360 has been set yet, the watch is expected to be released this summer. Until then, you can watch the video above to learn more about the Moto 360.

The video above outlines Android Wear.

The Moto 360 runs on Android Wear, which is Google’s new operating system for wearables. Other upcoming smartwatches that will also run Android Wear include the LG G Watch. ASUS, Fossil, and HTC will also offer Android Wear products.

The Moto 360 Might Only be Sold in Limited Quantities or Select Regions Due to Diffic… http://t.co/d1HJBAFPtl pic.twitter.com/L1MEI70VSo

The official Moto 360 site shows images of the watch being used to get turn-by-turn directions, deliver notifications, and tell time. The watch will come “in a selection of styles,” according to the site.

“Moto 360 also responds to your voice. Just say “Ok Google” to ask questions like who won the Stanford vs. New Mexico game or what time your flight leaves, or to get stuff done like scheduling an appointment, sending a text, setting an alarm or taking a note.

Most importantly, Moto 360’s iconic design, featuring a round face and premium materials, feels comfortable and familiar on your wrist. It’s everything you need, with a look that you want.”

The video above outlines the features of watches running Android Wear.

The Moto 360’s price tag is currently unknown. According to information the Wall Street Journal got from Lior Ron (Motorola’s VP of Product Management and Wearables Lead), the Moto 360 will cost “less than a Cartier.”

The smartwatch will debut in the US first, and then become available in additional markets.

According to the Telegraph, the Moto 360 will have a premium look and feel, but still also offer fitness tracking features. The device will provide real-time speed on your movements, and continuously update you on your distance from a destination. 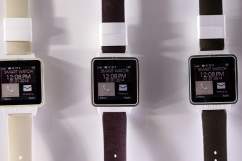