proof reg'd email of #SatoshiNakamoto on @P2P_Foundation @Ning same as one in #bitcoin paper https://t.co/5WFdE087x1 pic.twitter.com/kNkaEtdcDq

Business Insider has an interesting report that casts some doubt on Newsweek’s Nakamoto. The man Newsweek profiled was born Satoshi Nakamoto, but changed his name to Dorian S. Nakamoto later in life.

In the wake of the Newsweek article, a user claiming to be Satoshi Nakamoto posted an update on the social networking site Ning that stated, “I am not Dorian Nakamoto.”

“Josef Davies-Coates, the creator of Ning, confirmed that whoever has access to the Satoshi account there uses the same email address listed on the original Bitcoin spec paper…

It remains possible Dorian Nakamoto could be the person with access to the account, and is just confusing everyone.”

9 Conspiracy Theories About Newsweek’s Story On Satoshi Nakamoto, The Alleged Father Of Bitcoin http://t.co/82POkZIKr7 via @ryanpbroderick

In 2011, the New Yorker published an article about Bitcoin that suggested two men who might be hiding behind the Satoshi Nakamoto pseudonym. The article suggested Nakamoto was really Michael Clear, or perhaps Vili Lehdonvirta.

Michael Clear was in 2011, an Irish student studying cryptography. Vili Lehdonvirta is a Finnish economic sociologist. Both men have denied being behind Bitcoin, despite the fact that an analysis of Clear and Nakamoto’s writing styles showed some similarity.

Fast Company wrote an article that suggested the “real” Satoshi Nakamoto was actually not one person, but three. Fast Company pegged Neal King, Vladimir Oksman, and Charles Bry as the masterminds of Bitcoin. These three names all showed up on a patent document that might be related to Bitcoin security.

It’s interesting to note that the popular CBS series “The Good Wife” ran an episode about Bitcoin that also embraced this three-fold creator theory.

“I am not certain it’s Nick Szabo, but I have quite a few independent pieces of evidence pointing in his direction, each one interesting in itself:

– text analysis (only 0.1% of cryptography researchers could have produced this writing style –again, please, attack my methods on this)
– fact that Nick was searching for technical collaborators on the bit gold project (a very similar cryptocurrency) a few months before the announcement of Bitcoin (and then the bit gold project became perfectly silent)
– lack of citation of Nick’s work by Satoshi, whereas he cited other, less related cryptocurrencies
– lack of reaction on Nick’s part about Bitcoin, whereas a decentralized currency like Bitcoin had been a major project of his for 10 years
– fact that Nick deliberately post-dated his bit gold articles to look posterior to Bitcoin, shortly after the announcement of Bitcoin”

In the video above, IT pioneer Ted Nelson argues that Satoshi Nakamoto is the pseudonym used by Japanese mathematician Shinichi Mochizuki. The Age reports that Mochizuki has denied these claims.

Nelson argued that Mochizuki was the man behind Bitcoin for several reasons, most notably because of his math expertise. Nelson argues that Mochizuki acted like Nakamoto, in that both men basically dropped their most powerful “inventions” on the Web and then just walked away afterwards. Nelson adds that Mochizuki attended Princeton, which explains why “Nakamoto” writes in such excellent English. 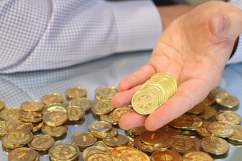