The Associated Press has released two videos on their YouTube page. In the videos, alleged Bitcoin creator denies having anything to do with the controversial cryptocurrency. In the video above, Nakamoto eats sushi while talking with AP reporters.

Going by his alternate name, Dorian S. Nakamoto, the alleged Bitcoin creator denies creating the Bitcoin currency. He says the wording of the Newsweek article was misleading.

“It sounded like I was involved before with Bitcoin…that’s not what I meant,” he says in the video.

In the second AP video below, there is an extended sequence from one of the scenes in the other video above. In this video, Nakamoto states: “I never communicated with Bitcoins,” and adds that he was unemployed during the time he was allegedly “working” for Bitcoin.

There is some doubt that this Satoshi Nakamoto is the real Satoshi Nakamoto. A recent report from Business Insider suggests that comments from the “real” Nakamoto have recently surfaced online, casting doubt over “Dorian S. Nakamoto.”

Do you think this guy really invented Bitcoin? 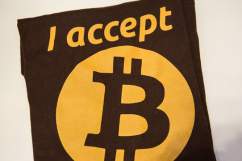