Aereo is at the center of an exciting Supreme Court case. Learn all about Aereo and the court case right here.

UPDATE: On June 25, the Supreme Court ruled against Aereo. CNN Money writes, “In a 6-3 ruling, the Supreme Court said Wednesday that streaming television startup Aereo violates the Copyright Act…Aereo had no immediate comment about Wednesday’s ruling.”

Learn how Aereo works in the video above.

Available as low as $8/month, Aereo is a service that appeals to people who want to ditch their cable providers.

Aereo provides a modern equivalent of the old “free over the air” model of watching TV. While antennas used to be quite large, Aereo uses a much smaller antenna to allow people to watch live TV on devices like smartphones, tablets, and computers. Aereo also includes a DVR service.

2. Aereo Is the Focus of a Supreme Court Case

Above, you can read an amicus brief filed by a group of 36 law professors on behalf of Aereo, Inc.

An amicus brief is a type of legal testimony, notable because it offers information that is relevant to the case, but has not been actively solicited by any of the parties involved in the legal proceeding.

At its core, the Aereo case before the Supreme Court revolves around whether Aereo is violating the intellectual property of broadcasters by allowing users to circumvent the traditional cable provider system entirely. Aereo’s critics argue that the service is just another form of piracy.

Bruce Ewing, a partner in the NY office of Dorsey & Whitney, is an expert in the litigation of intellectual property disputes. His office reached out to us, and Mr. Ewing has issued the following statement about the Aereo court case before the Supreme Court today:

“From the questions today, the Court seems torn about what to do. On the one hand, there didn’t seem to be a lot of sympathy for Aereo, and several justices seemed to have a dim view of Aereo’s system.

At several points, questions were asked suggesting that Aereo’s system was a contrivance configured solely or primarily for purposes of getting around the Copyright Act. At the same time, several justices seemed very concerned about what the effect of a ruling in favor of the broadcasters would be.

Justice Breyer, most notably, raised concerns about the impact of such a ruling on cloud computing specifically and new technologies generally. Ironically, there actually was not a lot of discussion about the public performance right and its scope, with which the case is primarily concerned.”

Is Aereo more like a parking garage or a valet, and other questions from today's Supreme Court case http://t.co/HWoO2cjYLH

The Wall Street Journal reports that Aereo’s stance is simple: the company is exempt from copyright law, as determined by legal precedent in another court case.

The Second Circuit Court of Appeals’ 2008 ruling in Cartoon Network v. Cablevision ruled that a recording of a TV show that was transmitted to a single person did not constitute an unlawful “public performance” of the copyrighted work. Even in cases where millions of people used the same means of transmission to watch a program, the court ruled that this still did not constitute a public performance of the work.

Aereo is also arguing that a blow struck against them in a court of law could have unexpected repercussions for the cloud computing industry as a whole.

4. Aereo Is Only Available in Select Markets

Many of you have asked for info on ways to support Aereo. Learn more at http://t.co/abnZc2e90K, sign up for updates & spread the word!

It is interesting that Aereo has found itself at the center of the nation’s highest court, especially given the fact that Aereo is not available nationwide. In their FAQ, Aereo states that only residents in “select areas” have access to the service.

We think Aereo's pretty great. But don't take our word for it. @Pogue reviewed Aereo for @YahooTech: http://t.co/7AOLx9N06t

Aereo has the financial backing of billionaire Barry Diller.

Diller recently wrote an opinion piece for the Wall Street Journal, which outlines his pro-Aereo position. Part of his argument reads:

“When radio and television entered American life in the 1920s, the government made a bargain with the nation’s broadcasters: They would receive free use of the nation’s airwaves in exchange for providing free, advertising-supported programming in return…

Why is the industry pushing to punish those who wish to receive their television through airwaves, which are not owned by broadcasters?

The answer is obvious: Broadcasters make more money when consumers are steered away from over-the-air program delivery and toward cable and satellite systems that pay the broadcasters retransmission fees. There’s nothing wrong with that. But it seems rich for them to forget the agreement they made to provide television to the consumer in return for the spectrum that enables their business.” 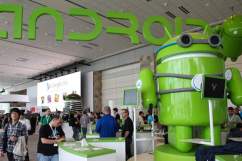 Aereo App For Android: 5 Fast Facts You Need to Know