The Amazon Fire TV offers both streaming media and gaming, as well as some clever features. The Fire TV is available to buy now on Amazon.

Is this new media box worth buying? Before you shell out $99 for the box (or an extra $40 for the gaming controller), you should read these expert reviews.

1. The Verge: ‘Doesn’t Push the Envelope’

The Verge‘s Dan Seifert has written an excellent review of Amazon’s new streaming media box. He had high praise for the ease of set-up and responsive interface. However, Seifert found fault with Fire TV’s lack of live TV options and “mushy” game control buttons.

Seifert sums up his findings:

“Thanks to features such as X-Ray, voice search, photo and music integration, the Fire TV is by far the best way to watch content from Amazon’s own Instant Video service. Add in the fun and engaging games, fast performance, and access to much of the same content and services you get on the other platforms, and it’s easy to see why the Fire TV replaces the Roku 3 as my set top box recommendation. But it doesn’t give its best features to its whole ecosystem, and if you already own an Apple TV or a Roku or a Chromecast, there’s little reason to invest in Amazon’s option.

For me, Amazon could have really changed the game by cutting deals to deliver live content and shows at the same time they are aired on cable and network TV. I was hoping that Amazon would give me what I needed to cut the cord once and for all and not look back, but that’s just not the case. Instead, it just gave me another box to watch the same content I can see plenty of other ways. And that means I’m likely going to be sticking with my cable subscription for the foreseeable future.”

The Associated Press has an insightful review of the Fire TV, and it is one of the most thoughtful and incisive reviews out there.

AP argues that the device is “great, but not fully ready.” While the review had some nice things to say about Fire TV’s interface and cool remote, the review was critical of the devices channel variety and limited voice search:

“Fire TV offers more than 175 video, music and game apps, but that pales compared with the more than 1,000 available through Roku. Still, it beats the few dozen offered by Apple TV.

Notable omissions in Fire TV’s app store include HBO Go, PBS and Apple’s iTunes. Major League Baseball, ABC and the Disney Channel are coming soon. Apple TV already has all that, but it doesn’t offer Amazon Instant Video directly on the device…

Unfortunately, voice search works only with a handful of apps. I was able to get content from Amazon Instant Video, Hulu Plus and Vevo, but it missed Netflix and others. Searching “House of Cards” got me season 1 episodes available for purchase through Amazon, even though Netflix had those for free, plus season 2.

Furthermore, the search is rudimentary. Speaking “Sabrina: The Teenage Witch season 4″ just got me the entire show, starting with season 1. The voice search recognizes titles of individual episodes, but it’ll take me to the show’s main page.”

IGN‘s hands-on review of the Fire TV is a must-read for people who intend to use the device primarily as a gaming center. Currently, the Fire TV supports Minecraft, The Walking Dead, Riptide GP, and Asphalt 8, but thousands more games will eventually be ported.

“There are occasional framerate hiccups, but never to the point of diminishing the experience. The optional controller is solid and takes on a Xbox-style ergonomic shape and configuration with staggered thumbsticks. It feels cheap compared to a first-party controller from Sony or Microsoft, but for the types of gameplay experiences offered on the Fire TV, it’s more than sufficient. All-in-all the controller feels great, save for an overly rigid d-pad.”

4. Wall Street Journal: ‘A Worthwhile Addition to Your Home’

“Amazon’s voice recognition technology isn’t perfect, but I found it to be almost as accurate as Apple’s Siri virtual assistant. (Neither quite get it when I say “George Takei,” the Starship Enterprise helmsman turned Internet meme impresario.) Fire TV isn’t the first device to bring voice commands to a TV, but it is the most straightforward and useful.

I vastly prefer voice search to the alternatives: hunting through on-screen apps for content, waving your hands around in front of a camera, or typing in keywords through repeated clicks on a remote or a tiny keyboard. Being able to easily search for keywords is liberating; I only wish Fire TV’s voice control also took commands, like “play most recent episode of ‘Scandal.’””

ReadWrite‘s review of Fire TV isn’t particularly favorable. ReadWrite’s Dave Smith had nice things to say about the speed of the device, as well as the design of the interface. However, Smith panned the high cost of Amazon-provided media, as well as the weak Voice Search.

“I didn’t ask for games. I didn’t ask for photos. I asked for a streaming media solution that could do things right: Something easy to pick up, simple to use, and something that actually made the experience of playing and navigating through multimedia, dare I say it, fun.

Amazon promised all of the above with Fire TV, which the company unveiled Wednesday at an event in New York City. Unfortunately, the device doesn’t live up to its own hype. Perhaps Amazon’s homegrown solution was a bit premature and its ambitions too lofty, because while Fire TV can do almost everything, little of it is done right.” 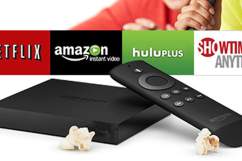