Watch this game in action in the video above.

Race Illegal: High Speed 3D got a big update last month, which included 26 brand new levels. If you are new to the game, or just haven’t played in a while, May 2014 is a good time to enjoy this exciting racing game. This game is on Version 1.0.17, but has already been downloaded over 10 million times. This game is designed to appeal to racing fans who like a bit of story and a street racing vibe in their games.

Angry Birds Go! was updated on May 6. It now includes new weekly tournaments, as well as new tracks and new lucky boxes. The game now also supports the ability to share snapshots of your race in action. If you love the characters from Angry Birds, and you love racing games, this is a no-brainer.

If you love motorcycle racing games, Moto Mania is an exciting way to explore various virtual environments. Moto Mania was updated in late April. This game has yet to achieve massive success, but it is an underrated title.

Check out Game Mob’s review of Offroad Legends in the video above.

Offroad Legends was updated in late April. This update added four new types of cars, as well as optimization fixes. In the update prior to that, new environments and 16 new races were added. The game has four vehicle categories (Monsters, 4×4 off-roaders, Behemoths, and fun cars). If you love the drama of offroading, this game is insane amounts of fun.

See Retro Future Racing gameplay in the video above.

Retro Future Racing is a new racing game that combines the retro look of classic cars with the futuristic style of hover car racing. It will appeal to people who love classic cars, as well as people who like a dash of sci-fi in their racing games. 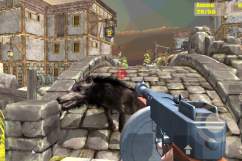