Apple’s WWDC event will take place in the first week of June. Last year, WWDC was the launch point for iOS 7, OS X Mavericks, iWork for iCloud, the Mac Pro, and a new line of MacBook Air laptops. Here are some of the most intriguing rumors about what will occur at this year’s WWDC tech event.

While the tweet above is obviously a joke, it is expected that the Mac operating system will be getting a drastic visual change at WWDC this year.

Mashable reports that WWDC is likely to be the launchpad for the new version of OS X. This will be Version 10.10 of OS X.

It is somewhat surprising that OS X could be the star of the show, since iOS has gotten so much more attention at the past few WWDC events. Mashable notes:

OS X 10.10 is expected to have a major visual refresh, but it will stay true to its roots as a desktop UI system, and is unlikely to incorporate more “touchscreeny” elements from the design of iOS.

It is not yet known what the official name of the new version of OS X will be. The era of cat-inspired names like Lion, Snow Leopard, and Tiger seems to be at an end. Mashable notes that the internal codename for the new OS X is Syrah, but Apple has acquired the trademarks for the names Yosemite, Mammoth, and Diablo. One of those three names is likely to be the name for the newest OS X offering.

2. iOS 8’s Healthbook Feature Could Be Unveiled (But Not the iWatch)

One of the most intriguing additions to iOS 8 is Healthbook, the icon for which was featured in this leaked screenshot.

If Apple’s much-rumored iWatch product ever launches, it is expected that Healthbook will sync with the iWatch as well. However, most tech insiders believe that the iWatch will not debut at WWDC 2014.

MacRumors notes that Siri may be getting another improvement at WWDC 2014. According to some reports, Siri may be integrated with Shazam, the popular song identification app. This would allow iOS users to ask Siri to identify a song playing in the background at a bar, or on a popular TV show.

MacRumors notes that Apple could debut a new Mac Mini at WWDC:

“Apple’s Mac Mini is long overdue for an update, having seen its last refresh in October of 2012. Apple’s plans for the computer are unknown, but a refresh could bring Haswell processors with Iris integrated graphics and 802.11ac WiFi support.”

It appears to be a longshot, but there is a slim chance Apple could use WWDC to debut their rumored “iPad Pro,” a 12- or 13-inch iPad model. NBC News note that the iPad Pro might offer a “Surface-like keyboard cover.” However, other tech insiders think that this rumored project may have been delayed or shelved altogether. 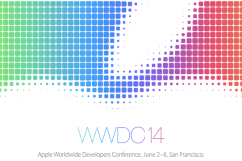