The Amazon Fire Phone has lots of smartphone shoppers intrigued, but can it stand up to the powerhouse that is the Samsung Galaxy S5? The Amazon Phone has some great built-in features, but there’s a reason that the Samsung Galaxy S5 sold 11 million units in its first month. If you can’t decide between these two cool smartphones, we’ve compare these two phones so you don’t have to.

Comparing the base price of the Fire Phone and Galaxy S5 models is a little bit like comparing apples and oranges. The base model of the Galaxy S5 costs just $99 with a two-year contract from most carriers. The Amazon Fire Phone, exclusive to AT&T, starts at $199. That being said, the base Fire Phone is 32GB, compared to the 16GB you get with a basic Galaxy S5.

While the Amazon Fire Phone isn’t exactly a bad fit for fitness fanatics, the phone clearly has a larger appeal to fashionistas and other people who love mobile shopping. The Firefly button makes it easy to snap a picture of a product in real life and buy it online (or just get more info.)

Additionally, the Fire Phone may have an edge when it comes to pleasing TV fans and film buffs. The Fire Phone comes with a free year of Amazon Prime, which gives users access to tens of thousands of TV and movie titles, as well as Kindle lending library titles and music.

Amazon comparing its Fire Phone to the iPhone 5S and Samsung Galaxy S5, claiming it has a better camera! pic.twitter.com/qOGh7UNCPA

Both the Amazon Fire Phone and Samsung Galaxy S5 claim to have excellent cameras. While both offer pretty solid photography abilities, there are a few differences between the two phones.

On the GS5, the rear camera is 16MP, while the front camera is 2MP. The Samsung Galaxy S5 boasts a selective focus lets you adjust the depth of field like a professional photographer. There is also an auto-focus that works in .03 seconds. The camera boasts HDR, which allows for more rich colors in photographs.

The Amazon Fire Phone has a 13MP camera sensor, which seems a little less impressive than the camera on the S5. That being said, good photos are about more than just megapixels. The image quality appeared to be quite good at the phone launch. Plus, there are extra cameras on the device to facilitate the 3D technology used in the phone. Also worth noting: the Fire Phone gives users free, unlimited photo storage.

With a fairly similar base of apps, roughly similar specs, and battery life that’s roughly equal, it’s hard to choose between these two phones. Amazon’s Mayday customer service is good for less techno-savvy smartphone shoppers, and the 3D features look to have some impressive implications for gamers. This may make this phone perfect for you, particularly if you are crazy about Amazon’s other tech products like the Fire TV or Kindle Paperwhite.

However, if you prefer a phone with a larger screen, slightly better specs, and more expansion options, the Samsung Galaxy S5 may be the right choice for you. 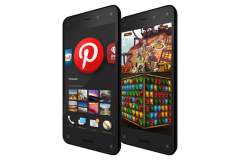