Google has launched an Android alternative to Apple’s CarPlay. Called Android Auto, this Google product offers a host of cool features. Here’s what you need to know.

Run entirely by your voice, Android Auto lets you respond to messages, send messages, play music, and get directions (without having to look up an address before you get started.)

In terms of music, Pandora, Songza, Stitcher, Spotify, Pocket Casts, and Tune In Radio are all supported within Android Auto.

2. Google’s Car Offering May Have a Few Bugs

In their liveblog coverage of the I/O Keynote, The Verge noted that a “super loud” car horn was going off prior to the start of the keynote. The Verge added: “It lasted for a good 20 seconds. Guess Android in the car still has some bugs to work out.”

As part of the Google I/O Keynote presentation, the Android Auto team did a demo of the product in a car they wheeled on stage.

Today's announcement means that both Apple CarPlay and Android Auto will be integrated in next-generation Volvo cars https://t.co/Ex1Mboikbo

The first cars that play nice with Android Auto will debut later this year, and will be able to be purchased before the end of 2014. You can sign up for more info at the official Android Auto website. The site also includes a full list of partners, including brands as diverse as Fiat, Ford, Bentley, Jeep, Audi, and Alfa Romeo.

4. Android Auto Knows Where You’ve Been

Check out a video about Android Wear in the video above.

Android Auto can track destinations you visit frequently. While this might seem a bit “SkyNet” to some, it is a handy feature. Android Auto also offers reminders based on your current location: the official site notes that one application of this feature is the ability to get a reminder to pick something up before you arrive at your destination (such as grabbing sunscreen at the store before you hit the beach.)

Here's a few shots of the Android Auto interface from #IO14: http://t.co/NwFzdvjS6f pic.twitter.com/PpnH9bNuCX

Android Auto will be fully integrated with selected cars. Even though the system can be used hands-free, Android Auto-enabled cars will be compatible with steering wheel buttons and dials within the car’s dashboard. 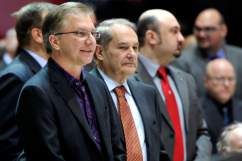 Apple CarPlay: The Top 5 Reviews You Need to Read