It’s not a scam or a hoax: T-Mobile really does want to give you a free iPhone 5s as part of their “7 Night Stand” promotion. Here’s what you need to know about this offer.

1. T-Mobile Will Send You a Free iPhone 5s to Use For 7 Days

T-Mobile is currently running a promotion called the T-Mobile Test Drive. T-Mobile is referring to their trial offer as a “#7NightStand” on Twitter.

To sign up, simply visit theT-Mobile Test Drive website. After you provide your contact info, the company will mail you a free iPhone 5s to use for a seven day trial.

When the trial period ends, simply return the phone to the nearest T-Mobile store. At that time, you can sign up for T-Mobile coverage of your own. Do note, however, that early termination fees may apply from your current cell phone provider if you have an existing mobile phone contract.

You can get a better look at the specs of the iPhone 5s here.

Apple Insider reports that the T-Mobile promotion begins June 23. T-Mobile estimates more than one million people will take advantage of the offer within the first year of availability. Apple Insider adds that the trial’s iPhone 5S will be swapped out for the newest model of iPhone later this year, when Apple launches the iPhone 6.

This free trial period seems to be a case of T-Mobile CEO putting his money where his mouth is. Legere recently went on a rant about other popular cell phone carriers not caring about their customers the way that T-Mobile does.

This free iPhone trial will enable users to enjoy both the iPhone’s great stable of apps, as well as testing out how well T-Mobile’s network covers their local area.

CNET refers to Verizon Wireless as the nation’s biggest wireless carrier: it seems like T-Mobile is using this aggressive iPhone strategy to take a bite out of the competition.

“In March 2013, T-Mobile changed its service plan model . Most importantly, it did away with contracts completely, which means that you can end your service at any time. Customers get unlimited voice and text messaging service, and on top of that can choose from a variety of data packages. Though total data use is unlimited, T-Mobile prices its plans by how much 4G data you can use each month. Also, T-Mobile no longer offer subsidies for its phones. You can either pay full price for the phone up front or you can “finance” your handset by paying monthly installments for two years.”

3. The #7NightStand Has Some Limitations

There are some limitations and warnings you should be aware of before signing up for this t-Mobile trial. You will need to be 18 years old, and you must provide a credit card number to get the phone. Additionally, you will need to be present when the phone arrives in order to sign for it. The T-Mobile website adds:

“T-Mobile Test Drive is free with no obligation to buy, but if the iPhone 5s comes back with a cracked screen, damaged screen display, water damage, active Find My iPhone feature, or can’t be powered on we have to charge a $100 damage fee. If you don’t return the device, we have to charge $699.99 plus applicable taxes.

A hold for $699.99 + taxes will be placed on your credit or debit card. The timing of releasing that hold will vary by credit card company. We won’t charge your card unless you fail to return the device.”

There will be a grace period for those who return the phones a bit late. We’re guessing that people who jailbreak or attempt to install an unauthorized iOS 8 beta will also risk penalization.

4. Apple Used A Similar Trial Program Back in the 1980s

It makes sense that Apple is partnering with T-Mobile to provide phones for the “7 Night Stand” promotion. Mac Rumors notes that Apple itself used a similar program back in 1984 to get people to try the original Apple computer.

My Old Mac has an interesting rundown of this 1984 marketing plan, and how well it worked out for Apple:

“In November, Apple buys every advertising page in a special post-election issue of Newsweek. The issue’s final ad is used to launch a…promotion, in which customers are invited to take a Macintosh home for a free 24-hour trial. About 200,000 people do just that, and Advertising Age magazine names ‘Test Drive’ one of the ten best promotions of the year.”

5. Using the Hashtag #7NightStand Can Score You a Big Prize

Of course, if the iPhone gets broken or lost during the Test Drive, you do have to pay http://t.co/Jkpps1kCtr pic.twitter.com/gb9maekuOh

“Start your fling with T-Mobile and take the #7NightStand Challenge. Tag @TMobile and include #7NightStand to be entered for a chance to win prizes. Make it to Day 7 and you may win an all-inclusive getaway for two!”

The sweepstakes ends on August 18. The Official Rules note:

“#7NightStand (the “Sweepstakes”) is open only to legal residents of the fifty (50) United States and the District of Columbia and Puerto Rico who are at least eighteen (18) years old at the time of entry.”

In other words, trying out an iPhone for seven days could score you a nice vacation, as well as a fun iPhone 5s trial experience with T-Mobile. Based on social media activity, it seems like T-Mobile has created a very buzzworthy offer.

Like T-Mobile’s network, but not a big fan of the iPhone? Check out some of the Android phones T-Mobile carries. 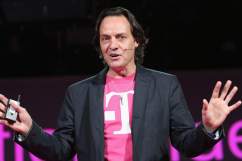