(Romans In My Carpet!)

Check out a preview of Samurai Siege’s first mission in the video above.

If you like your strategy games with an Eastern twist, Samurai Siege is a solid option. Set in feudal Japan, Samurai Siege offers real-time strategy combat in a setting filled with ninja armies, samurai warriors, and monsters from the Far East. This game will appeal to fans of RTS games, as well as those with a passing interest in Asian culture.

Check out the launch trailer for Romans In My Carpet! in the video above.

Despite a somewhat silly name, Romans In My Carpet is a really fun game. It channels the wacky spirit of Monty Python, but also provides a fun gaming experience. The devs recently fixed an issue with completed matches being deleted prematurely, which makes the game more enjoyable than ever. Bringing the best of strategy warfare and comedy together, this amusing game is totally unique.

Get a sneak peek at this game in the video above.

Order & Chaos Duels is an addictive collectible card game that will challenge your strategic acumen. The ancient demonic spirit Zepar and his Corruption have returned to use the world as their twisted playground once again. As the player, you must become the great hero known as the Card Dueler, and save the world from darkness. For fantasy fans and card battle fans alike, this game is a must-play.

Check out the launch trailer for Metal Slug Defense in the video above.

For many, Metal Slug was the pinnacle of 2D action-shooting on the NEOGEO. Now, the game returns in a tower defense/strategy game for Android. In Metal Slug Defense, players must. The retro platformer look is a nice touch, as it makes this app look a little different from a lot of the other top-down strategy games out there.

Released at the tail end of May, Age of Wind 3 is a cool strategy game set on the high seas. This game is the third installment of the series, but the game can be enjoyed by those who didn’t play the original. For fans of pirates or strategy titles, this is a must-have on your Android device. 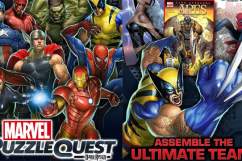