Tune in to watch Motorola’s live event, which will feature two new phones and at least one wearable. Just click on the player above to start the show. The event starts on September 5 at 1:30 PM Central time.

The new Moto G, new Moto X, and Moto 360 are all expected to get some stage time at this Chicago event. The new phones, previously rumored to be called the G2 and Moto X+1, will be officially referred to as “the new Moto X” and “the new Moto G.”

Join Lauren Gellman, Director of Product Marketing, and Steve Sinclair, VP of Product Marketing at Motorola, will be on the livestream to show off Motorola’s new devices and take questions in a Q&A format. You can participate in the event by asking questions on Twitter using the hashtag #askmoto.

Still waiting for the livestream to start? Check out the video below, which features Jim Wicks, lead designer of Moto 360. He explains what makes the Moto 360 different from other smartwatches.

Interested in the new Moto X? The video below makes some predictions about the specs and features of this new phone, and it’s interesting to see how those predictions panned out.

Curious about the other new phones that debuted earlier this week? Check out our extensive coverage of IFA 2014. 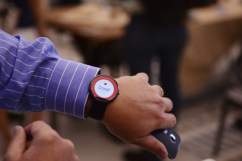