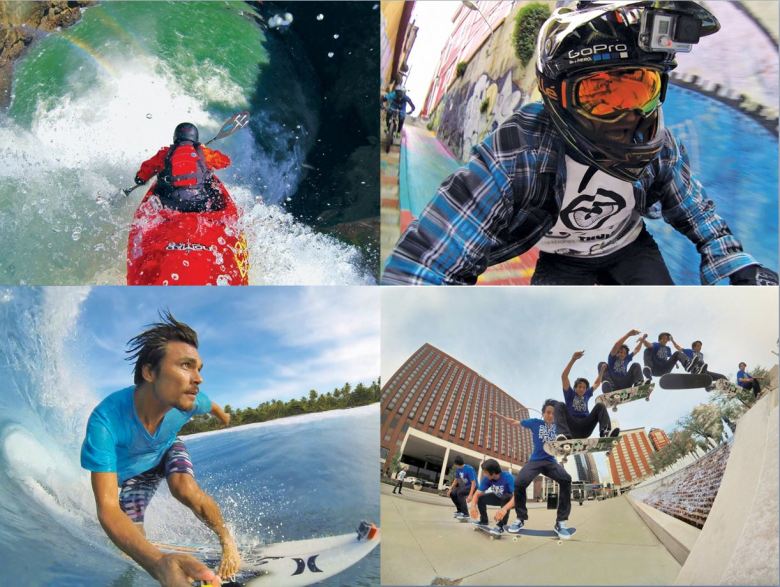 You feel that sensation? It’s the wind screaming past your face as you skate, bike, surf, jump, fly a wingsuit with a GoPro strapped to your head recording one of the best moments of your life. Go Pro makes amazing high impact cameras that are small and powerful with plenty of accessories. This is the GoPro HEAVY POWER LIST for 2015 – GoPro Cameras & Accessories, Mounts, Batteries and Media Cards to accessorize your GoPro to the MAX; make your life an adventure with one of these “experience makers”. Here is a sample of what you can look forward to…

The GoPro HERO4 Silver is at the top of the Heavy GoPro Power List. It comes with a number of our favorite features including a built-in LCD touch screen, wideR-angle lens, ultra-high quality video including 12 MP (Mega Pixel) photo images at speeds up to 30 fps (frames per second – like television), HD (Hi-Def) at 1080p60, 960p60 and 720p120, ultra-smooth slow-motion playback, 2 second quick start record, built-in Wi-Fi and blue-tooth & is waterproof up to 40 meters. The HERO4 Silver can shoot 10 photos in 1 second sequences, and a time lapse feature enables setting time intervals of 0.5 to 30 seconds. To find the Time Lapse feature select burst mode & press the options button on the side of the camera.The HERO4 Silver is a #1 Best Seller on Amazon and 70% of reviewers Rate it 4+ stars.

Note for Current GoPro Owners
All GoPro Cameras are the same physical size so GoPro3+ accessories work for the GoPro 4 except the battery.

GOPRO HERO4 REMOTE CONTROL
The HERO4 Silver has built-in Wi-Fi; if you download the free GoPro App (Smart Remote) it turns your smartphone/tablet into a live video remote control for GoPro Hero4 functions, settings and social distribution. For those of you with multi-camera shoots Smart Remote allows you to control multiple GoPro cameras up to 600’ (180m) away – great if you have a drone.

GOPRO HERO4 – WHAT IS THE BACPAC ?
GoPro cameras by design are compact and some features like battery life and shot framing can be enhanced with a bacpac (for GoPro3+ and below) – a small outside shell that attaches to the GoPro camera to extend a defined set of features.

GOPRO HERO4 BATTERY BACPAC FEATURE
If you want more than an hour of battery life out of your new HERO we recommend purchasing either a Battery BacPac for $49.99, or an additional rechargeable battery, or both. The battery bacpac is great for situations where it’s challenging to swap out a battery, such as underwater photography or motor-cross. Battery bacpac’s can be charged with a USB charger, Car and wall chargers, which are sold separately. Battery’s can be charged with the GoPro Hero4 Battery Charger or Dual Battery Charger, if you have two.

SANDISK EXTREME MEMORY CARD
Amazon reviewers report that 16GB of memory is nowhere near enough to take advantage of the speed and capacity of your GoPro HERO4 Silver; consider purchasing a Class 10 SD memory card with 64GB. SanDisk produces the Extreme which is highly recommended; it transfers video at up to 45MB/sm, and will comfortably record 4K video and Full HD 1080p. Update: GoPro Firmware just updated to provide 1080 supervideo@60 fps, 2k@30fps & 4k@15fps.
Note: When uploading your videos and pictures to a computer the Gopro will ask you if you want to clear the SD card. ALWAYS say no. However, in the event you do delete files the SanDisk Extreme also comes with a data recovery program called RescuePro that will recover files deleted from your memory card months prior. The Extreme works with any microSDHC, microSDXC, SDHC and SDXC compatible devices. To Find Out More or Buy the Extreme Memory Card Click Here

GOPRO HERO4 MOUNTS
At just 2.6 ounces the GoPro HERO4 Silver is built for mounts. It is super portable and there are a LOT of mounts to choose from:

GOPRO HERO4 USER INTERFACE (UI) & STUDIO SOFTWARE
The Menu system for the GoPro HERO4 is intuitive to navigate; selecting menu options and exiting does not require scrolling and one touch “settings/tag” replace the Wi-Fi button. The GoPro 3 LCD bacpac is compatible with the GoPro HERO4. Use GoPro Studio software to create your own engaging GoPro-style videos to share with friends and on social media.

The GoPro HERO3+ SILVER is next on Heavy’s GoPro Power List with high quality 1080p60, 960p60 and 720p120 video, 10 mega-pixel photos that can be taken 10 per second, a wide-angle lens, slo-motion playback and waterproof up to 40 meters(131 feet). The HERO3+ Silver comes with WiFi and enables the GoPro App to act as a remote control on your smartphone or tablet just like the HERO4. It also has time-lapse with intervals of 0.5 to 30 seconds, is built for gear mounted shots (lightweight at just 2.6 ounces), has strong audio capabilities with advanced wind noise reduction & enhanced audio capture, and the Smart Remote feature enables control of multiple GoPro cameras from distances of up to 600 feet (180 meters). The Hero3+ Silver is highly rated both by both Amazon reviewers – 83% rate it 4+ stars – and Consumer Reports who rate it 66/100.

Note: The HERO3+ and HERO4 models use the same gear mounts and accessories, EXCEPT battery.

GOPRO HERO4 BACPAC FEATURES
BacPac accessories can really amplify the enjoyment you will get from your GoPro HERO3+ Silver. The two BacPac features to focus on are the LCD Screen and the removable battery pack.

LCD BACPAC
The GoPro HERO3+ BacPac is detachable, has an intuitive user interface with one touch settings, and can be used as a viewfinder to set shots, watch what is being recorded and playback video & photos. The LCD BacPac is available from GoPro for $79.99 – Click Here to Buy it or Get Further Information.

BATTERY BACPAC & EXTRA BATTERYS
GoPro produces a battery bacpac for the HERO3+ which is reported to extend battery life by 2x or 3x depending on video quality and frame rate used. This is particularly useful for situations where it is not convenient to change the battery. 80% of reviewers rated the battery bacpac 4+ stars, and almost every review of a GoPro camera of any model recommends buying extra battery’s, battery bacpacs and a suite of chargers. For More Information or to Buy The Hero3+ Bacpac Click Here. Wasabi sells a highly rated set of extra battery’s with charger at a very reasonable $19.99. For More Information or to Buy The Wasabi Extra Battery Pack and Charger Click Here.

NOTE: Reviewers indicate you will need to have the camera format the memory card in order for it to work well. To format the card go into the menu option within the camera itself using the trash can icon.

GOPRO HERO3+ USER INTERFACE (UI) & STUDIO SOFTWARE
Like the HERO4, the HERO3+ LCD has an easy to use UI and is touch sensitive with no scrolling. The GoPro 3 LCD is compatible with the GoPro 4 and vice-versa. The Studio software enables basic editing and distribution through social media. Reviewers recommend updating any GoPro you acquire to the latest firmware immediately upon purchase. 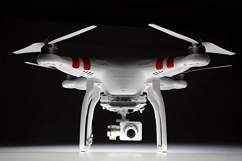 Phantom 2 Vision with 14 MP Camera: All the Photos You Need to See

The GoPro HERO is the entry level model. Perfect for beginners and dabblers – the HERO gets you into the world of GoPro without a major investment – but there is enough “GoPro” to get you in the deep end. The HERO video captures at 1080p30 and 720p60, it features one-touch record, is waterproof up to 131 feet (40 meters), is able to grab fast action sequences at 5 frames per second, includes wide angle lens, an in-camera microphone, has low-light sensitivity and weighs an astonishing 3.9 ounces. At $129.99 this is a great starter video camera, not just a starter GoPro. 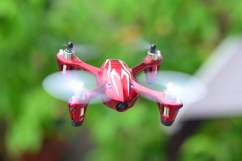 The GoPro HD HERO is a HiDef video and imagery machine. Shoot in three(3) different HD resolutions as well as 5 megapixels photos.The HD HERO comes with helmet mount, quick release housing that is water and shock-proof,a wide-angle lens and default settings so that you can turn on your HD HERO and go. This HD HERO is popular with professional film and television producers, action sports and other athletes. 75% of Reviewers on Amazon Rate the HD HERO 4+ Stars. It is currently unrated by Consumer Reports.

The GoPro HD HERO shoots photos in 5 MP (megapixel) with auto-shoot modes for 2, 5, 10, 30 or 60 seconds. Other features include single shot, triple shot and self-timer. The HD HERO comes with automatic gain control audio processing, that will automatically adjust sound recording for optimal results including in high wind environments. A HERO BUS port on the back of the camera enables expansion for an LCD screen Bacpac.

The HD HERO comes with a rechargeable 1100mAh Lithium-Ion battery with an expected life of 2.5 hours of record time and an integrated battery heater for cold climates. The HD HERO can be used while the camera is charging and the battery can be charged using a wall charger or USB charger. A second battery can be added to extend battery life up to a projected 5 hours of record time with a battery Bacpac.

The HD HERO comes with 32GB of capacity (which is a LOT) and according to specs should store up to 9 hours of HD video recording or thousands of photos. The HD HERO will also take smaller SD cards – 2, 4, 8, and 16GB.