After years of rumors, we finally know every spec, important feature, and price point of the Apple Watch. The latest entrant into an already crowded smartwatch marketplace, the Apple Watch has definitely piqued the interest of more than a few shoppers. But for the money you’re spending to get an Apple Watch, could you get an Android Wear watch that’s just as nice?

Android Wear is an operating system that you’ll find on a wide range of smartwatches, including watches from Samsung, ASUS, Motorola, and LG. These watches are designed to be companion devices to your Android phone, and many of them cost less than the entry-level Apple Watch. But price isn’t everything. Read on to see how the Apple Watch compares to various watches on the Android Wear platform. We’ll compare these two watch types across several important areas, including price, battery life, and features.

So, how does that compare to an Android Wear watch? An LG G Watch will set you back about $229, while a Asus ZenWatch will cost you about $250. The critically-acclaimed Moto 360 smartwatch retails for around $250, but you can find it online for about $230.

To put both the Apple Watch and Android Wear watch prices in perspective, here’s some info about how much you’d spend for a watch that runs a different OS. The Pebble smartwatch retails for a mere $99, with the more premium Pebble Steel on sale for around $199. A Samsung Gear 2 smartwatch, which runs on Tizen OS, will cost you around $299. The Samsung Gear Live, in contrast, does run on Android Wear, and it costs $199. 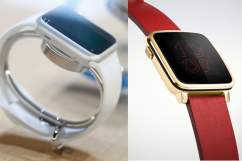 Check out the video above to see how the LG G Watch stacks up against the Samsung Gear Live.

The Apple Watch claims to have 18-hour battery life. That’s pretty disappointing to iPhone owners, because pretty much every Android Wear watch on the market has the Apple Watch beat when it comes to battery life. It’s also likely that some Apple Watch users will see battery life that’s even shorter than the manufacturer estimate, at least if they are heavy users.

Learn more about the Moto 360 in the video above.

Each Apple Watch variant comes in either a 38mm or 42mm face size. The coolest feature of the Apple Watch is arguably Apple Pay, which is accepted at thousands of stores in the US. This contactless payment system lets you pay for items without having to open your wallet. Other cool things you can do with the Apple Watch include playing a limited number of games, opening select hotel room doors, taking calls, answering texts, or tracking your fitness/heart rate.

When it comes to waterproofing, the Apple Watch has a few points in its favor. You can shower with the watch, and it can handle being splashed with a little rain. However, you should avoid submerging it in water. ZDNet notes that the Android Wear line ranges from IP55 to IP68 in terms of water/dustproofing, compared with the Apple Watch’s IPX7 rating. The Apple Watch doesn’t have built in GPS. Neither do most of the other Android Wear smartwatches on the market, with the exception of the Sony SmartWatch 3. 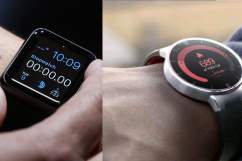 Check out a hands-on video featuring the Sony SmartWatch 3 above.

It almost seems silly to think about accessories for products that are, themselves, designed to be accessories for your phone. But between screen protectors, charging docks, and alternative wrist straps, there are actually a lot of nice accessories out there that can help you get the most from your smartwatch experience.

Should you buy the #goldenwatch? Here's a handy shopping guide. #ZenWatch. pic.twitter.com/goI8fycMEy

Ultimately, the watch you choose will depend on what type of phone you have. That’s not just a matter of personal preference, but a matter of fact. All of these watches need to be paired to a phone. The Apple Watch doesn’t pair with Android devices, and Android Wear watches aren’t designed to play nice with the iPhone. That being said, at least one developer has found a workaround hack that will let you get iPhone notifications on your Android Wear watch.

The Apple Watch has one nice perk that you don’t really see in a lot of other smartwatches: customization. In addition to a much larger array of watch strap styles than you’ll see with Android Wear Watches, you can choose between a 38mm or 42mm size. That does let you pick a size that fits your wrist just right. However, the lower price point of the Android Wear line does give those watches a serious edge for the budget-conscious.

Ultimately, while the Apple Watch has some redeeming factors, it’s still a disappointment to many Apple fans. It’s expensive, it’s not fully waterproof, and it doesn’t have GPS built in. The battery life isn’t very impressive compared to other smartwatches on the market. Here’s hoping the next-gen Apple Watch is a big step up (with a big drop in price).

If you own an Android phone, we’d recommend you get an Android Wear watch. We particularly like the Sony SmartWatch 3 and the Moto 360. If you own an iPhone and want a smartwatch, you might be happy with an Apple Watch. However, you should also consider some iPhone-friendly smartwatch alternatives, such as the Pebble Time or Alcatel OneTouch smartwatch. If you don’t want to wait for the Pebble Time to ship, you can try the original Pebble smartwatch or the elegant Pebble Steel watch. 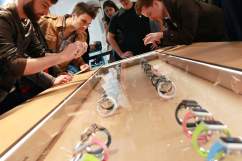