Everyone is getting into the VR game in 2015. Heck, even the old school View-Master toy is getting an update this year. While Oculus may still be one of the leading names in VR tech, both HTC and Samsung now have VR headsets that can be used for gaming or media. Both devices have very similar, rather bulky form factors. But despite similar appearances, these devices are very different. Read on to see which VR headset is best for your needs.

There is an “innovator edition” of the Gear VR on sale now. Depending on where you buy, and whether you want it used or new, you can expect to pay a little under $300 for the privilege of owning this headset.

Pricing info for the HTC Vive is not yet known. 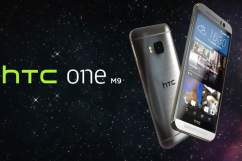 The Samsung Gear VR only works with the Samsung Galaxy Note 4, which severely limits its audience. During their MWC Unpacked event, Samsung announced a new Gear VR would be coming soon. This newer version of the Gear VR will work with Samsung’s recently announced Galaxy S6 and S6 Edge phones.

In contrast, the Vive VR headset works independently of a smartphone. This makes it more appealing to people who don’t want a VR option that is tied to a specific smartphone.

Go hands-on with the Samsung Gear VR headset in the video above.

There is an “innovator edition” of the Gear VR on sale now. It is widely believed, but not confirmed, that an improved version of the product will be out later this year. Games and apps for the Gear VR are available from the Oculus VR app store.

The Vive from HTC will work with select Valve/Steam games, as well as content providers like HBO, Google, and the National Palace Museum in Taiwan. Unfortunately the developer edition won’t be on sale for a few more months. However, HTC is promising to deliver a consumer edition (which will be improved over the developer edition) by the end of 2015. According to the Verge, the Vive will also work with a new product called the Steam VR base station. Instead of using controllers, you can actually walk around in a space. This will require a space of up to 15 feet by 15 feet to work. Wareable‘s report adds that HTC’s ambitious timeline may even mean that we see a final, consumer-ready version of the Vive before Oculus hits the market with their comparable device. 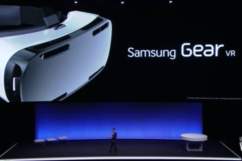 Samsung’s Gear VR headset is shown during a demo at IFA 2014. (Getty)

HTC’s Vive headset will have two wireless controllers with hand tracking abilities. Like the Gear VR, you can get 360 degree views of media and games, though HTC claims that their product is the very first headset with “full room scale.” The refresh rate on the developer edition is 90Hz. Battery life is not yet confirmed.

The Gear VR, which only works with the Samsung Galaxy Note 4, has a mere 60Hz refresh rate. Gizmag estimates that, based on their hands-on sessions with this headset, you will see battery life for the Note 4 cut by about 20 percent during a 30 minute session. It’s not yet clear how battery life might be improved with the S6 versions of the Gear VR.

A lot of this choice comes down to brand loyalty. If you already own a Samsung Note 4, then the Gear VR is a natural choice. If you’re planning to buy a new S6 or S6 Edge, you might also be interested in a new Gear VR. However, if you shop outside the Samsung ecosystem, you might be more intrigued by the HTC VR headset. Ultimately, both of these VR headsets are in their infancy. Both will have some kinks to work out before next-gen models hit stores in the coming months and years. There does seem to be a bit more buzz around the HTC Vive, despite the Gear VR having more time to develop a fan following. The Vive’s partnership with Valve is definitely a big plus in their favor. It’s early enough in both of these product’s life cycles that you will want to keep an eye on what Sony’s Project Morpheus and Oculus are doing in the coming months as well.

There is an “innovator edition” of the Gear VR on sale now. The new HTC Vive will go on sale in the next couple of months.