HTC says they design products that people will love. But will you love the new One M9? If you are curious about how the new HTC One M9 stacks up against past efforts from the company, we’ve got a simple breakdown of everything you need to know about the One M9 before you buy it. Learn everything you need to know about this new smartphone before it hits stores right here, including specs, features, price tag, and availability info.

This metal unibody phone has a dual-tone finish. It will be available in gold, silver, pink, and grey. Inside this metal phone, you’ll find a Snapdragon 810 processor.

The new One M9 has a main camera with a 20MP sensor. It is covered with scratch-resistant sapphire glass. The camera is designed to take great selfies. It has also been designed to provide great results in low-light conditions. Unlike the M8, the new One M9 has placed the UltraPixel camera on the front of the device.

BoomSound speakers with Dolby Audio Surround 5.1 sound are included on this phone, which is great news for people who love great music. HTC’s partnership with Harmon/Kardon lets you access all speakers in your house to share music from your device.

The new One M9 is made with a “zero gap” process, which lets them make the phone almost entirely out of metal. This gives it added durability, as well as a nice feel in the palm of your hand.

Sense 7, HTC’s Android Skin, also has some cool features to help you personalize your phone. You provide a single photo, and Sense is smart enough to build out colors, and icon set, and fonts to use on your device.

The Dot View case is back in its second generation. Originally introduced last year with the HTC One M8, the new version of the Dot View case will let you customize your case design, and you can even play games on it now.

Finally, the new One M9 can be used with HTC’s new wearable. Made in partnership with Under Armour, the new HTC Grip fitness tracker will sync with Under Armour Record, and let you track your progress towards your fitness goals. You can also create custom challenges and compete against your friends. If you want to know more about HTC’s first wearable, check out our post comparing the Fitbit vs. HTC Grip.

Get a closer look at this new phone in the video above.

This is a flagship phone, so we expect it to carry a hefty price tag. It will likely cost about what the HTC One M8 cost when it was new. We’ll update with exact price info as soon as we have more information. We can tell you that a leaked Best Buy listing that was posted prematurely listed the phone’s price at $649.99 off-contract of the 32GB model.

Phone Arena reports that the official pre-order price for the One M9 in Germany is €749.99, which converts to about $835 in American currency. 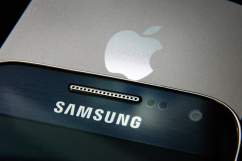 The HTC One M9 will be available in North America and a few other regions of the globe starting in mid-March. A more precise release date is not yet known. Pre-orders will likely open up shortly before the official release date.

5. HTC One M9: What Carriers Will Have This Phone Available at Launch?

People in North America will get access to the One M9 this month. It is expected that all major US carriers (T-Mobile, Sprint, Verizon, and AT&T) will carry this phone. Some carriers may have exclusive versions of the phone in the future, but this is not confirmed.

Another HTC item unveiled today, the HTC Vive VR headset, will also be on sale soon. However, it is not yet clear where you will be able to purchase this device. All we know for now is that this device will be available in the spring as a developer edition, with a full consumer version due out later in 2015.