Drone manufacturer DJI has detailed their newest addition to its Phantom RC drone line: the DJI Phantom 3. And, quite impressively, the Phantom 3 is a big step up from the Phantom 2 with new additions that are sure to make any drone enthusiast swoon, including an upgraded camera and live HD streaming — and there’s more!

So what’s the newest DJI drone all about? Here are 5 fast facts you need to know about the Phantom 3 drone:

1. The Phantom 3 Drone Will Come In Two Different Editions.

DJI has revealed that their newest RC quadcopter will come in two different versions: the advanced edition and the professional edition. The advanced edition will only have a 1080p camera and will come in at $999, while the professional version will feature a full 4K video camera and will be priced at $1,259. Both Phantom 3 editions will use a three-axis gimbal to stabilize the camera for smooth video.

2. Both Phantom 3 Models Will Have DJI’s Lightbridge Technology.

DJI’s Lightbridge technology will be stock for both of the Phantom 3 models. Lightbridge allows users to see exactly what the drone sees live in HD via a stream, as long as they stay within a mile range of the drone.

3. The Phantom 3 Will Use GLONASS So That There Will Be More Satellites To Contact.

4. The Phantom 3 Has a Better Battery Than the Phantom 2.

The Phantom 3 will see a battery upgrade from the Phantom 2, as the former will use upgraded Intelligent Flight Battery that has built-in sensors to give battery stats in real time. And, the Phantom 3 Professional will have upgraded charger so that it chargers quicker. However, we don’t know how much quicker just yet, but we’ll be sure to update with that information when we get it.

5. The Phantom 3 Will Ship To Consumers In The Next Few Weeks.

DJI will begin shipping their new drone within the next few weeks. In fact, Amazon already has a listed ship date of May 15, 2015. You can already pre-order the Phantom 3 right now via Amazon. You can also visit the DJI official YouTube to check out some truly great Phantom 3 videos. 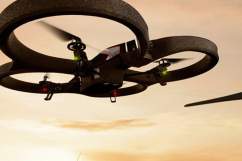