Apple released a software update for their new series 3 watches today. This will upgrade watches to watchOS 4.01. The previous version, WatchOS 4, became available on September 19.

The new update claims to have fixed a Wi-Fi bug that some Series 3 owners were experiencing. The bug prevented devices from connecting to LTE, instead forcing the watch to connect to unauthentic Wi-Fi sources. This bug only affects LTE-enabled watches because non-LTE enabled devices would always be connected to Wi-Fi.

According to sources, Apple knew about the glitch for about two weeks before releasing the update to address the issue.

“We have discovered that when Apple Watch Series 3 joins unauthenticated Wi-Fi networks without connectivity, it may at times prevent the watch from using cellular,” the released statement read. “We are investigating a fix for a future software release.”

The released statement regarding the update said that the issues were happening in rare cases on LTE-enabled Apple Watches and forcing Apple Watch to join unauthenticated networks, like those found in cafes and direct users to a webpage before allowing a connection. Since those connections often require a password or accepting terms of service on a webpage, it isn’t possible to connect with the Apple Watch.

Some users took to Twitter to detail their situation.

Received my new Apple Watch Series 3 yesterday. It has a cellular glitch and won’t connect. Now I have to wait… https://t.co/G8SfQ4D8bO

@apple major issues with my Apple Watch with LTE. several instances where I have LTE and the Watch wont send messages or connect. Fix? Soon?

This person still seems to be dealing with the issue:

Has anyone successfully got their new Apple Watch to connect to LTE yet.. cuz…. mine still doesn’t work.

This user is upset about a feature that isn’t working for them:

Apple clearly has some support to work out, but hopefully the software update will remedy any issues that owners are currently experiencing.

To download the new update, go to the Watch app on your iPhone or other Apple device. From there, click on General and ten Software update. Your watch must be connected to Wi-Fi, placed on its charger and have at least 50% battery life to download the new operating system. 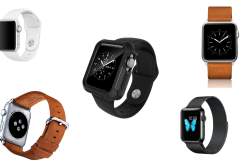