What has become of the sweet and adorable little girl that used to charm the world by making silly jokes on All That in the 90s? Amanda Bynes does not cease to amaze the world after transforming into a rebellious self-proclaimed millionaire in her post-child star life. In her latest stint, Bynes advertised on her Twitter Thursday night how much she likes Drake. This is one you have to read for yourself:

I want @drake to murder my vagina

It’s was no secret that Bynes thought The Motto singer Drake was a “hot fellow,” but this is a bit forward, even for her. The raunchy tweet came just a day after the What I Like About You star showed off her drastic makeover with cheek piercings. As for her recent erratic behavior, a friend close to Bynes told Radar Online that the retired star is oblivious to the fact that she isn’t building the best reputation.

“Amanda has absolutely no idea about the reputation she’s getting for all of her weird behavior,” the source told the website. “In fact, when she got her DUI and those hit-and-run allegations all she talked about was the publicity she was finally getting!” 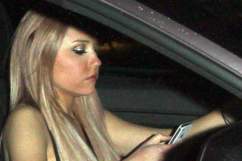 Read More
Amanda Bynes, Drake, Twitter
Amanda Bynes wants Drake to do what... to her WHAT?!