Skip forward to 10:15 in the video to hear Franco talk about rejecting Lilo. 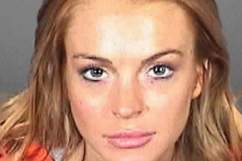 Franco says he was staying at the decadent Chateau Marmont hotel in Los Angeles when he first met Lohan.

Oh, gosh. Poor Lindsay. I haven’t talked to her in a while, I mean, I don’t want to brag about it. I don’t know how that got out, [she] was having issues even then, so you feel weird. Honestly, she was a friend. I’ve met a lot of people that are troubled and sometimes you don’t want to do that.

If a douche like James Franco isn’t willing to have sex with you, you know you have problems. Seek help, Lindsay.