Sean Bean, best known for playing Ned Stark in HBO’s Game of Thrones, is making heads turn with emerging photos from a past role.
In the BBC’s 2012 legal drama Accused, Sean Bean played a tranvestite. The Independent Reports:

And if you didn’t already see it, click below to see Game of Thrones co-star Peter Dinklage (Tyrion Lannister) on this past weekend’s SNL where he played Drunk Uncle’s friend, Peter Drunklage. 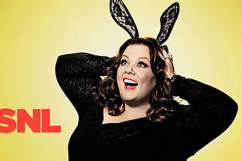