Breaking News! DWTS will totally change it up next season. Instead of having a two-hour episode on Mondays with a results show on Tuesdays, they’re going to pack it all in to Monday’s two-hour episodes. Thoughts?

30 minutes until #TheResults! Who are you rooting for tonight? #DWTS

Who will make it to the finish? Watch last night’s competition before tonight’s Results Show! bit.ly/YTSV6J twitter.com/DancingABC/sta…

Mmmmm can’t get enough of those suspenders on Derek. 9:05pm

55 consecutive pirhouettes?! Holy crap! Raise your hand if you can do one. 9:15pm

That little girl is amazing! 9:19pm

Who will go home tonight? #DWTS

Loving all the behind-the-scenes stuff. 9:24pm

Ladies, dry off your seats… The Wanted is performing. 9:27pm

So, was their performance everything you “wanted”? 9:30pm

Zendaya and Val in jeopardy… Zendaya does not look happy. 9:41pm

Ingo and Kym are in jeopardy… Are Aly and Mark? Nope. 9:51pm

New drinking game: Take a shot every time someone makes a joke about stealing something. 9:52pm 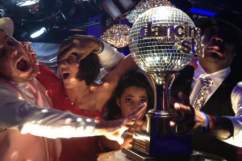