Word on the baby street is that Kim Kardashian is having a bit of trouble in the breastfeeding department. This is a natural problem for many mothers, especially first-time moms. Here’s 5 Fast Facts about what’s going on with Kim and her boobies.

1. Kim is Breastfeeding, But It’s Not Easy

She has been telling friends that it is really hard, so we don’t know how much longer she’s really going to do it.

Fans are rooting for baby Kaidence to adapt to breastfeeding … and for Kim.

@KimKardashian It is NOT easy at all!! Don't give up! Breast is best for baby!! It'll def be worth the struggle!!

2. Kaidence Donda West May Switch to the Bottle

Now that Kim Kardashian's baby's here, will she feed it by bottle, breast… or will it just feed on the 'soles' of Louboutins?

If breastfeeding doesn’t take, it is quite common to switch to formula. According to KidsHealth, some tips Kim could try to get a fussy baby to take milk include burping your baby more often, trying various positions with the child, holding the baby upright, playing music for the baby, or putting the baby in a swing.

3. Kourtney Has Offered to Breastfeed Kaidence

Back in January, SunriseNews shared that Kim Kardashian told the Today Show that Kourtney said:

In the old days, and maybe we should try this, one sister should babysit all the kids, so I can go out or vice-versa, and whichever sister is babysitting should just breastfeed all the kids that are there

Kourtney thought this was a good idea and that the concept doesn’t freak her out. We don’t think she’ll actually be breatfeeding baby Kaidence, but hey, ya never know!

4. Kardashian Has Already Come Up With a Plan

A source also told RadarOnline that:

Kim is probably already plotting what she’s going to say when she stops. She’ll come up with a really good excuse I’m sure.

If this is true, we’re not sure why Kardashian would make up a reason. Sometimes breastfeeding just isn’t for everyone.

Don’t worry, Kim. Just a little consultation from your doctor and you can begin the transition little by little. When it comes to switching to formula, KidsHealth also reports that:

The doctor may suggest mixing the two formulas together little by little, then eventually eliminating the original formula altogether.

And that’s our health lesson for today, kids.

5. Some Think Kim is Using Some of the Breast Milk for her Psoriasis

On an episode of Kourtney & Kim Take Miami, Kim discovers that breast milk helps her Psoriasis. So, she begins to steal some of Kourtney’s breast milk until she finally gets caught! Hey, if baby Kaidence doesn’t want any, maybe Kim Kardashian will make use of the breast milk herself. 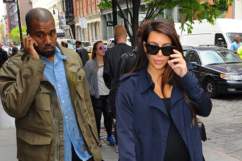