Let’s talk a little about Miss Connecticut Erin Brady, winner of Miss USA 2013. Take a look at these 5 Fast Facts on some things you may not know about the beauty.

They even have a wedding website that’s still in the works. Check it out here.

2. The Miss Universe Pageant Conflicts With Her Wedding Date

November 9, 2013 was announced tonight as the date of this year’s Miss Universe Pageant in Moscow. Will Brady have to appear there and come up with a new wedding date? Uh oh.

3. Brady Grew Up in an Abusive Home

Growing up in a household that suffered from alcohol and substance abuse took a toll on Brady. Now, she is determined to be an advocate for children in similar situations.

4. She is All About Numbers

The New Miss USA Works In Finance by @JuliaLaRoche http://t.co/tVrQwVEfie

The girl actually graduated with a degree in Finance and a minor in Criminal Justice from Central Connecticut State University. Currently, she is a Financial Accountant for Prudential Retirement in Hartford, where she is from. She plans on getting her MBA soon and getting involved with Pension Risk Transfers. Yowza! Beauty and brains?

Miss Connecticut just said she hates twitter and that we’re all dumb. #MissUSA

Upon answering questions in regards to social media, Brady revealed she is a people person and would much rather talk to someone on the phone as opposed to tweeting or facebooking others. Makes sense. However, some of her young fans are not pleased. 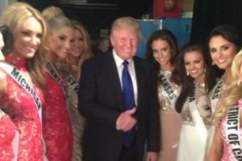