In case you missed it, we’ve put together the Top 10 highlights from this years Miss USA pageant. Enjoy!

Spinning his new track “Back To Love” during the last moments of the competition, he was in heaven as he rocked his blow-out and fist pumps.

It’s all about the Jonas Brothers’ performance as the stunning contestant strut their stuff in their bikinis for the swimsuit competition. Starting off with their new single, it’s all about “pom poms” here.

3. Giuliana Rancic is Back Hosting With a New Co-Host

We have some surprises for you tonight for the #MissUSA competition. Don't miss it 9 pm ET on NBC

And, this year, Giuliana got to design one of her own outfits for her hosting gig.

Three wardrobe changes tonight for #MissUSA!!! I designed the second pink dress. Lemme know if u like it:) #gdress

Mr Donald Trump and some of the fabulous Miss USA contestants #CLMissUSA pic.twitter.com/NrKTp6YTYr

Of course, at the end, Donald Trump announces with Miss Universe that the Miss Universe USA pageant will be taking place November 9, 2013 in Moscow.

5. Betsey Johnson Rocks The Judges Table Wearing Her Own Crown

Wendy Malick Brings Hot in Cleveland to the Judges’ Table.

6. Christina Milian Appears as a Judge With a Little Surprise Her surprise is actually a new song she’s been working on with Jersey Shore’s Pauly D.

7. You Can Tweet the Top 10 Contestants Into the Next Round

Top 10 have just been announced. Their fate is in your hands! Tweet #NextMissUSAxx (state abrv) NOW to move your favorite to the next round.

This is the very first time that viewers were able to participate in voting. Miss Texas ends up winning over the Twitter world.

$1,000 and a “big weekend” at Trump’s Resort in Las Vegas is what Miss Utah gets to take home.

The Top Five were Miss Utah, Miss Alabama, Miss Illinois, Miss South Carolina, and Miss Connecticut. The finalist with the most tweets was Miss Texas, so there was actually a Top Six. Nonetheless, Miss Connecticut takes the crown. 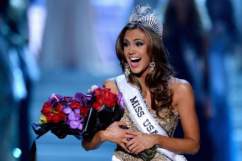