Huge congrats to @meganfox and Brian Austin Green, who just announced that they're expecting again: http://t.co/hnpiIcqDJV

According to OK! Magazine, the couple is expecting again and they are reportedly “very happy” about it. Plus, the world is secretly hoping it’s a girl — a little sister to be exact (a.k.a. hopefully a clone of Megan). The couple’s first little boy, Noah, was born in 2012. Meanwhile, Greene has an 11-year-old child named Kassius Lijah Marcil from a his past with Vanessa Marcil. So, it looks like the baby-to-be will have two older brothers already. But, since the sex of the Megan and Greene’s baby number two is still unknown we’ll have to keep our fingers crossed.

I can confirm Megan is expecting her second child with her husband Brian. They are both very happy.

Hollywoodite also reports on an interesting interview Megan had with Marie Clarie UK just a few months back, saying:

All I wanted to do my whole, whole life was have a baby and, now, I’ve finally done it. I just want to give Noah as much of myself as I can. And I want to have more kids. That is where my heart is.

Well, the beautiful actress can check that one off her list! Bring it on, baby number 3. 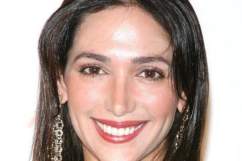