The sexy and fun Kaley Cuoco of The Big Bang Theory is engaged to Ryan Sweeting. Check out these 5 Fast Facts on their engagement and a little more background on Cuoco’s man.

1. The Couple Has Only Been Dating a Few Months

Kaley Cuoco and Ryan Sweeting have only been dating three months, according to Us Weekly. Not only has Cuoco’s rep confirmed the engagement news, but an inside source has said:

It’s only been three months but she knows Ryan is the one … When you know, you know.

2. Sweeting Is a Bad Boy On and Off the Tennis Court

For those of you who don’t know, Ryan Sweeting is a pro tennis player. But, what some of you may not know if Sweeting has a record. He’s been arrested for drunk driving and drug possession in the past, according to The National Enquirer. The publication states:

Bahamian-born Ryan was an 18-year-old freshman and top tennis player at the University of Florida when he was arrested in March 2006 for drunk driving and drug and alcohol posses­sion in Gainesville.

Let’s just hope that Sweeting has gotten a little “sweet”-er over the years.

3. Cuoco Is Happier Than She’s Ever Been

Flying high, I could literally touch the sky with you….

Cuoco tweeted the above tweet. She’s clearly on Cloud 9, over the moon for Sweeting. The tweet was on Tuesday though Sweeting didn’t propose until Wednesday, September 26th. Even so, it’s said that the tweet was written AFTER Cuoco accepted Sweeting’s proposal, so there’s a little confusion.

The proposal comes just days after their first red carpet debut for events surrounding the Emmy’s and Cuoco considers Sweeting to be her penguin.

When a penguin finds its mate, they stay together for life.

Look at that rock. Good job, Sweeting! A friend of Cuoco’s told US Weekly:

[She’s] never felt this way. She knows this is it. And the ring is gorgeous!

This will be the first marriage for each of them.

5. The Bride-to-Be Is Already Celebrating Her Engagement to Sweeting

Out with her chicas, sister Briana and mother Ashley, Cuoco is already celebrating her new life with Sweeting. 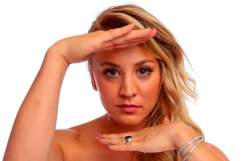