It’s the finale of Homeland’s season 3 and tensions are high. The big question on a lot of people’s minds is “Will Carrie get Brody out of Tehran alive?” The finale episode is titled “The Star” and we’re covering it live right here.

UPDATE: Now that the finale has ended, check out the up-to-the-minute updates from the airing of the show with details, tweets, and photos from the episode below.

The big @SHO_Homeland season finale is about to begin. Fasten your seatbelts

Season Finale of #Homeland. I have this unsettling feeling Brody won't make it to Season 4.

Only if #Javadi knew what just happened he wouldn't run so fast.#Homeland

Brody has to take time to tuck in his pants before trying to escape from Iran. Logic. #Homeland

So far so good with Brody’s escape … Spoke too soon … Brody puts a gun to his driver’s head and hell breaks loose. 9:05pm

Saul has a perfectly good theory, except that he’s wrong. #Homeland

I still can't believe that Brody did it, he actually did it #homeland

Carrie just found Brody in a car, made him move to the passenger seat to hide, and she took the wheel! 9:09pm

Saul just learned the news that Carrie was right about Brody. 9:09pm

Brody reveals to Carrie that he was born in the desert. He looks so gaunt and his eyes are like glass as he looks out the window while Carrie drives. 9:12pm

Carrie and Brody arrive at their safe house. 9:14pm

Brody’s having trouble with the fact he killed a man, while Carrie is assuring him that it was the right thing to do. 9:17pm

Saul calls Carrie to congratulate Brody on his kill and let them know that they’ll be getting out soon … Something seems fishy though. 9:18pm

Waiting for Carrie to drop the "pregnant" bomb on Brody after all he's been through. #facepalm #homeland

Uh oh. They’re caught. It looks like a set up as Brody is taken away as Lockhardt has ordered Brody be detained. 9:22pm

Carrie calls Saul in a panic and Saul is outraged. 9:23pm

Carrie is on the move as she clears everything out of her hotel and just as she’s leaving, she’s taken to meet with Javadi. 9:25pm

"It was always about him. That's what you care about, maybe the only thing." Javadi to Carrie. #Homeland

Brody … You in danger, Girl. #Homeland

Carrie calls Brody in prison and he tells her that he wants it to be over. He also asks Carrie not to be present at his hanging because he doesn’t want her to go through watching him die. Carrie says she will be there no matter what. 9:31pm

Saul tells Carrie that the situation is hopeless as she’s trying everything she can think of to save Brody. 9:33pm

Brody is being escorted by police to his execution. Carrie is at the execution site waiting. 9:35pm

I'm so immersed in #Homeland that I can't imagine the series without Brody. This is an incredibly powerful moment in TV history. Sad.

When offered a blindfold, Brody refuses it. He is spat on as the noose is put around his neck. 9:37pm

Carrie watches crying as Brody is raised in the air, hanging by his neck. 9:38pm

Carrie cries out to Brody before being hit down by the baton of a policeman. 9:38pm

And that’s the end of Brody as he hangs lifeless. 9:39pm

The show flashes to four months later with Saul at the beach. 9:40pm

Saul talks about how he hasn’t heard from Carrie at all since Brody’s death. 9:42pm

Carrie thinks Brody deserves an award for his service, but is denied. 9:44pm

“My mom was…intense.” -daughter of Carrie (Homeland) to her therapist 30 years from now

Carrie is convinced she can’t be a mother between her lifestyle and her job. 9:46pm

Why would Saul offer Dar a job? #Homeland

Carrie randomly announces to her sister and dad that she’s moving to Istanbul and will give the baby up for adoption. They are not having it … 9:50pm

Love this scene of Carrie with her dad and sister. #Homeland

Carrie’s dad says that if she doesn’t want the baby, he’s going to take her. 9:51pm

Saul congratulates Carrie on Istanbul and she wishes him luck in New York. 9:54pm

When it's over it's over, pull down the shades and go home. #Homeland why do you do this to me. WOW

Because Brody doesn’t receive a star on the wall, Carrie actually takes a sharpie and draws one for him on the wall of the CIA once every has left. 9:57pm 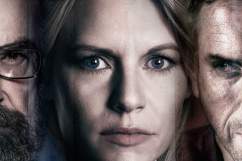