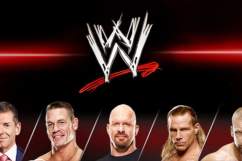 UPDATE: The WWE Network will officially launch on February 24, 2014 at 9 a.m. EST. This 24/7 online streaming service will cost $9.99 (monthly price) for a six-month period. All 12 of WWE’s monthly PPV events will be available to watch on the WWE Network at no extra charge. The WWE Network will be available on all these listed platforms: Amazon’s Kindle Fire devices, Android devices, iOS devices, Roku streaming devices, the PlayStation 3/PlayStation 4 and Xbox 360/Xbox One. The next-gen console apps will arrive later this summer. All the content will be cast in 720p HD. Users can buy event tickets and official merchandise from the WWE Network app as well.

Wrestling’s most popular company (World Wrestling Entertainment) is heading to CES 2014 to make one of biggest announcements…ever. All the evidence we’ve seen thus far points to it being the official unveiling and details behind WWE’s planned 24-hour, video-on-demand service – the WWE Network. Here’s a roundup of all the details released on the WWE Network thus far and what you can look forward to seeing once its live and ready for your hardcore wrestling viewing habits.

1. The Big News Has Already Been Spoiled by WWE Themselves

A mass e-mail was sent out from WWE officials, which included this spoiler-worthy title – “WWE Event Reminder: WWE Network Announcement scheduled for Wednesday, January 8.” The following press release you’ll read below definitely let the cat out of the bag:

In recent months, WWE’s official YouTube channel has posted up several interviews between WWE COO Triple H and longtime WWE announcer/commentator Michael Cole. One of the newest interviews that has gone up is an interview that shows Triple H alluding to the mega announcement that the WWE is prepared to showcase live at the 2014 edition of the Consumer Electronics Show. In the video, Triple H promises that tonight (January 8, 2014) will change the WWE forever. You can watch that interview above.

3. A Fan Survey Pointed to the Development of the WWE Network

UPDATE: The first PPV to be streamed on the WWE Network is Wrestlemania 30.

The beginnings of the WWE Network began when the WWE conducted a number of surveys that were targeted at its fanbase. The survey included questions that asked fans if they were willing to pay a fee for a subscription-based premium cable channel. After the survey, an e-mail was then sent to fans who were noted as having some vested interest in the WWE Network. This e-mail included questions that alluded to the WWE Network possibly airing WWE’s monthly PPV’s for no extra charge. Another important note that was evident in this fan e-mail/survey was the possibility of the WWE Network airing old and current wrestling footage.

4. The WWE Network was Officially Announced in September 2011

The official announcement and overall concept of the WWE Network arrived in September 2011. Over the next few months, a promo for the upcoming premium channel began airing on WWE TV. You can check out the promo above.

For several months, the hype behind the offical debut of the WWE Network took a huge upswing. On November 27, 2011, WWE encouraged its fanbase to being notifying their cable television service provider of the WWE Network. The original launch date was prepped for April 1, 2012 (which also happened to be the same date as the airing of WrestleMania 28). WWE.com even featured a countdown clock that was set to count down to zero on that exact day. The clock was subsequently removed from WWE.com and the WWE Network ended up making a non-debut. Since 2012, scattered news and rumors surrounded the WWE Network. Few fans even wondered if the network was even still alive at all.