Rapper Young Jeezy has been arrested and charged with a slew of horrific crimes allegedly perpetrated against his own son in September 2012, reports TMZ.

1. Jeezy is Accused of Beating the Sh*t Out of His Son

The Atlanta-rapper is accused of battery, false imprisonment and making terroristic threats against his son. Jeezy allegedly got into a fight with his son in a bathroom. The charging documents state that he threw the boy against a glass shower door, punched him, dragged him out of the restroom and began beating on him some more.

2. He Then Allegedly Threatened to Kill Him

While he was choking his flesh and blood, he’s alleged to have said, “I will kill you.”

The son also says that his dad told him, “I will put a bullet in your head right now” and “If I could get away with it, I would kill you.”

3. He Handed Himself Over to Authorities

After a warrant was issued for the rapper’s arrest, when his son finally came forward with the allegations, Jeezy turned himself in to authorities on January 3. He was soon bonded out for $45,000.

4. Jeezy Has Had a Bad Year

This is the second legal issue to affect Jeezy this year. In April, a copyright claim was filed against the rapper over the song “Jizzle,” which was released in 2010. A songwriter named Brian Smith claimed that he wrote the song in 2008.

5. Jeezy Was Previously Accused of Not Paying Child Support

In 2005, the mother of Jeezy’s son (it’s not known if this is the same son from the assault dispute), Tynesha Dykes, claimed that the rapper was not fulfilling his child support payments. Dykes went to the media when she learned that her former lover was opening his home to Hurricane Katrina victims but not fulfilling his court-mandated payments. 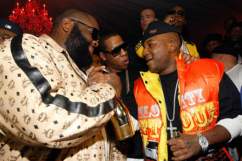