Don’t be fooled by all those tattoos. Alex Pettyfer is a sensitive leading man. On Valentine’s Day, he’ll heat up the screen with Gabriella Wilde in Endless Love. The pair play a modern-day version of star-crossed lovers.
In an interview with VMan, he talked about his newest role.

I think I am most vulnerable when I have to be somewhat like myself and be more charming and lovable. It’s easier for me to play darker roles. To open yourself up and open your heart, it’s a scary thing. It’s a scary thing in life, let alone in a movie.

Here’s what you need to know about the 23-year-old Brit, who has an interesting life on and off screen.

1. He Played a Stripper in ‘Magic Mike’

Starring opposite Channing Tatum and Matthew McConaughey, he has vivid memories of his experience on set. He told Vanity Fair about his most surreal moment.

Being thrusted by Matthew McConaughey in the gym while he’s wearing yellow spandex shorts and ballerina shoes. It’s quite funny.

He also dished about Tatum, who was a stripper in real life, mentoring him during the shoot.

Yeah, he definitely taught me about this world. I was very naïve about everything that went on and he gave me the insight into it. It was really interesting. You know what, I was really nervous to be a part of it, but I found a kind of salvation in the fact that everyone was in the same boat.

The pair met on the set of Wild Child, fell in love, and he has the starlet’s name tattooed on his ring finger. Us Weekly reported that in an interview with Glamour UK, he spoke of not having any regrets about the ink.

I got a girl’s name tattooed on my ring finger because I was in love. We’ve broken up, but I don’t live in regret.

According to VMan, he has a tattoo above his crotch that says, “Thank You.”

He dished to Cosmopolitan about which tattoo stands out as his favorite.

My favorite one is “What goes around comes around” on my shoulder. I’m a big believer in karma, but 90 percent of people say, “Isn’t that a Justin Timberlake song?” I did a movie with Justin and told him, “You’re a fucking pain in my ass, mate!”

He told Cosmopolitan that he’s boring because he abstains from drugs and alcohol.

But I’m a boring motherf—-er. I don’t drink alcohol. I’ve never taken drugs — ever. So I don’t go out to nightclubs or anything. I go to Disneyland, or I’ll rent a go-kart track and go racing.

The straight-edged star does give Hollywood a run for its money. In a 2011 interview with VMan which is no longer on the magazine’s site, the Daily News reported that he said,

I’ve heard I’ve been called a bad boy, or difficult. Maybe that’s because I don’t take any bulls—.

He also gave his strong opinion on living in L.A.
Geographically it’s fantastic… but socially it’s disgusting. I wish they’d run all the c–ts out.

4. He Played a Disfigured Teen in ‘Beastly’

The movie is a modern-day version of Beauty and the Beast, set in New York City. Pettyfer plays a vain student who taunts a witch, and she leaves him disfigured. His love interest is played by Vanessa Hudgens.

To transform into this haunting character, he had seven pieces on his head and 60 tattoos and individual scares applied each day.

The actor told hitflix what it was like to shave his head for the role.

It really affected me because as soon as I shaved my head it kind of put me in this weird place, the same place [Kyle is in after his transformation] which really helped me with the role a lot.

5. He Broke His Collarbone in a Motorbike Crash

My one and only MCM Alex Pettyfer pic.twitter.com/L59snsgulc

Pettyfer is often seen around L.A. on his Ducati bike.
Hollywood.com reported that at the time of the crash, he was going 160 miles-per-hour.

According to the Daily Mail, he’s been cast as James Hunt, a famous Formula One race car driver. 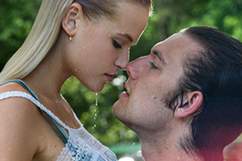