The Francis Underwood-Raymond Tusk political drama continues to unfold. Here’s what happened in season 2, episode 6 of House of Cards.

The episode begins with a continuation of the Chinese samarium crisis, with energy prices skyrocketing throughout the United States during a particularly hot summer. Frank and Raymond discuss the issue over a phone call, and Raymond seems keen to reconcile past differences to solve the growing crisis… Frank not so much. Frank then heads to a meeting with the President and his committee and gets everyone to agree that a subsidy for nuclear energy would be ideal. Remy comes to Frank’s house later that night and informs Frank that Raymond is none too pleased with what happened in the meeting with the President earlier.

Lucas is in a meeting with a prosecutor trying to strike a deal with him over the death of Zoe. Frank has planted damning evidence in Lucas’ apartment which the prosecutor brings to light; Lucas informs the prosecutor Frank is behind this. The prosecutor doesn’t want to hear it. Lucas declines the plea deal and decides to go to trial for the murder of Zoe. Lucas is adamant on getting an article out with his side of the story out with Bob Hammerschmidt.

After work, Rachel is seen exiting the Fellowship with a friend. Suddenly a car starts; it’s Doug. He admonishes her for leaving her safe-house apartment. Rachel tells Doug she’s getting bored in the apartment. Doug tells her she needs to stay contained. Hammerschmidt’s article is making everyone jumpy. Doug goes to Frank, and Frank decides to set-up a meeting Hammerschmidt. Doug later goes back to Rachel; they are currently having an affair.

Remy goes out with Congresswoman Jackie and ends up waking up with her, too. She informs him that once she leaves his room, there will be no special treatment in political matters relating to Remy’s lobbying. Remy doesn’t seem so sure. Jackie leaves his room with, “Let me know what Tusk has to say.” Remy texts Jackie in her car that Raymond wants to meet at the Supreme Court.

While Frank is at Oriole Park at Camden Yards to throw out the first pitch, all the lights go out in the stadium. Frank is rushed off the field by Secret Service before throwing the ball. The White House descends into chaos, with the President on the phone with Raymond. Blackouts are occurring all over the United States. As the President and Frank discuss the accelerating political disaster, Frank casually reveals he might have let something slip on accident that would have upset Raymond. 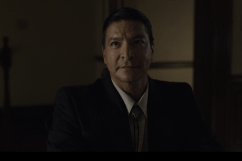