NXT HAS ARRIVED! The WWE Network is going to showcase it’s brand of future stars with a special, two-hour special devoted to the NXT brand. There’s going to be a host of great wrestlers and Divas who will be on hand to show the WWE Universe what they’re bringing to the next generation of wrestling stardom – high octane energy and new faces to cheer/boo for. Check out the results below as we recap the match and promo happenings of NXT ArRIVAL!

If you need some extra info on this event and the athletes who are a part of the NXT roster, hit up the following two links below: 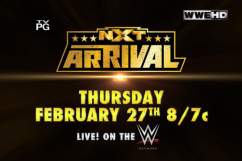 Best Moments/Highlights: Cesaro powered down and Zayn, which led to Cesaro disrespecting him by smacking him across the back of the head. Zayn sent Cesaro outside of the ring and laid on him with an over-the-top rope plancha. Zayn went for a body splash, but got caught in midair by Cesaro and spun into a tilt-a-whirl back breaker. Cesaro body slammed Zayn on the harder part of the ring. Cesaro tried to take Zayn and twist his leg around the ring post, but Zayn countered and took his foot and revved Cesaro into the ring post. Zayn went for his Tornado DDT through the bottom ring rope, but was countered by a lethal Cesaro European uppercut. Cesaro locked in a really extra painful looking Single Leg Crab to the injured left leg of Zayn. Zayn tried to hit Cesar to with a Split-Legged Moonsault to the outside of the ring, but Cesaro caught him and planted Zayn with a spinning side slam to the ramp. Zayn made it back into the ring before the ref’s 10-count. Cesaro ran into Zayn, but Zayn countered him with an Exploder Suplex into the corner ring post. Zayn then hit Cesaro with a Blue Thunder Bomb, but only got a two count. Zayn hit a Complete Shot on Cesaro and transitioned into a Koji Clutch. Cesaro got out of the hold and locked Zayn into a Stretch Muffler. Zayn broke out of the hold and grabbed the ropes. Cesaro went for the Big Swing, but got countered by Zayn into a pin. Cesaro kicked out and rotated Zayn six times with the Big Swing. Cesaro then uppercuted Zayn in the corner and gave him a Double Stomp just for good measure. Zayn gave Cesaro a Yakuza Kick while Cesaro was sitting on the top rope. Zayn went for a top rope Hurricanrana, but Cesaro held onto him. Zayn countered that counter by hitting the previous move on Cesaro successfully. He then hit another Yakuza Kick on Cesaro in the corner of the ring and almost got the win. Cesaro assaulted Zayn with several uppercuts and demanded that Zayn stay down, but he kept getting up. Cesaro and Zayn got into a fist fight, but Zayn prevailed and hit him with a German Suplex. Zayn countered Cesaro’s following moves with roll-up pins to the delight of the crowd. Cesaro launched Zayn into the air and cracked him with another uppercut. Zayn surprisingly kicked out at one. Cesaro finally put down Zayn afterwards with his Neutralizer finisher.

Best Moments/Highlights: Mojo hit two nice Stinger Splashes on CJ Parker, then he hit him with a nice Thump. The end came shortly thereafter once Mojo landed his Running Seated Senton on CJ.

Best Moments/Highlights: Scott got into a scuffle with Viktor and laid him out with a Facebuster. Scotty then tried to hit The Worm on Viktor, but Konnor tried to stop it from happening. Viktor then woke up and laid him out. Viktor followed with an STO. The Ascension then landed The Fall of Man on Scotty for the win.

Head to the next page to ge even more match/non-match results and highlights for NXT ArRIVAL!