Tonight is the Writers Guild Awards and we’ve got the webcast of the show streaming for you right here alongside a live social chat. The show begins at 5 p.m. EST/ 8 p.m. PST, but in the meantime, pre-show interviews and past footage will air. The LA Times reports:

Comic actor Brad Garrett will host this year’s ceremony, and viewers can tune in to the live webcast, which will also feature pre-awards interviews with nominees from film and TV.

Be sure to tune in this evening and keep your eyes peeled for the rest of our WGA coverage! 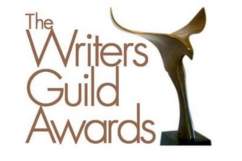