Jennifer Lopez did a lot of booty shakin’ tonight on American Idol as she performed her latest single “I Luh Ya Papi.” Before you check out the performance video, check out the song’s music video above … Warning: It features a lot of man candy. Then check out tonight’s JLo performance in the other video below:

Tonight was the world premiere performance for JLo’s new song. Things started off with JLo and some of her dancers gossiping about American Idol’s guy contestants. Then they began to sing acapella together on what appeared to be a stoop on the street with a graffiti painted background.

Finally, JLo got up off the steps, decked out in denim, to sing with her backup dancers before rapper French Montana came out for his part. At the end of the performance, Lopez was kind enough to introduce her fellow singers to the audience … Pia Toscano, Jessica Sanchez and Allison Iraheta are all Idol alums …

The best part of the performance was watching fellow Idol judge Harry Connick Jr. bop his head and sing along to JLo’s song.

And, of course, Ryan Seacrest had to ask JLo who her “papi” was when she returned to her Idol chair … Have a look at the footage below:

Unfortunately for JLo, some of her performance was lip-synced, which we know happens with everyone, but viewers were not pleased and an uproar on Twitter erupted with tweets like these:

So Jlo is a judge on a singing competition show and she has the nerve to get up and lip sync her own performance. Weak!

@AmericanIdol @JLo Please no! Love her but lip syncing? Do the contestants get to lip sync next week? 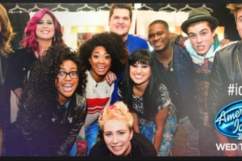