Chord Overstreet seems to have been destined for success in the music industry. Not only is his name melodic, but he’s also from Nashville.

On Glee, he quickly became a fan favorite as the goofy, yet lovable Sam Evans. His carefree attitude and memorable voice has made him quite the heartthrob on the show.

Lucky for us, his parents introduced him to music at a very young age, buying him a mandolin when he was 3. “It was the only instrument that fit me because I was so small,” he said.

Here’s all you need to know about the boy who grew up to be an icon for Gleeks everywhere.

The blonde won the role of Sam rather quickly. He told Interview magazine:

I auditioned for the show within 30 minutes of being notified — played three songs, did the studio test, the network test, and was on the show recording my first song the day after I found out I got the role.

His first appearance on the show was in Season 2, and had him singing Poison’s “Every Rose Has Its Thorn” in the shower. Finn discovered the transfer student’s strong vocal chords, and the rest is Glee-ful history.

In 2011, producers decided not to make him a series regular for Season 3. Instead, they offered him a recurring role, but he declined. “They offered me the chance to come back for a few episodes, but there was nothing guaranteed so I decided to dive into the music thing,” he told TV Line.

This caused a frenzy on Twitter, with Gleeks getting #dontcutthechord to trend.

In 2011, Ryan Murphy, the show’s creator, told the Hollywood Reporter, “I’ve never seen such a huge amount of stories about somebody’s option not being picked up — particularly when they were always, in my mind, coming back to the show.”

2. He Makes a Cameo in His Brother’s Hot Chelle Rae Video

Chord’s older brother, Nash, is the lead guitar player of the pop rock band Hot Chelle Rae, and he put his brother in the band’s “Tonight Tonight” video.

In the video, Chord makes out with the singer’s girlfriend, to the lyric “My girlfriend went and cheated on me.”

When asked if Chord gets his fair share of women, band member Ryan Follese said, “I would say yes; whenever we’re hanging out we’re having a really really good time and usually a lot of women come up and talk to him.”

Nash told NovaFM about sharing success with his younger brother:

In early 2009 we went to Los Angeles to record our first record and at the same exact time he started shooting a movie. It was really cool to have the first official real gig in each of our careers at the same time.

3. His Nickname Is Trouty Mouth

On Overstreet’s first ever Glee episode, Puck, played by Mark Salling, asks, “Dude, your mouth is huge. How many tennis balls can you fit in there?”

In an interview with Zap2it, Overstreet acknowledged that he took the comment in stride:

I laughed when I read that in the script. I mean, I always got compliments or comments on my lips because I do have big lips.

However, he did say that the being on the show made him realize his exaggerated feature:

I didn’t even know that I had big lips until I guess I joined the show. I hadn’t even thought about it. But if that’s the only thing they can point out, then I’ll take it! A lot of girls always compliment guys with big lips, so I don’t know! [Laughs]

4. His Songwriter Dad Influenced His Name

He’s written for some of the biggest stars, including the Judds, Randy Travis and Blake Shelton.

Songs such as “She Thinks My Tractor’s Sexy” by Kenny Chesney and “When You Say Nothing at All,” the tune made famous in Notting Hill, were also co written by the elder Overstreet.

Since Chord is the third child, his name is a reference to the three notes that form a chord.

He told Vulture about how Glee’s casting director first announced him:

When the casting director introduced me, he was very good about it. ‘Everybody, this is Chord Overstreet — yes, that’s his real name.’

5. Emma Roberts Is His Ex

Chord met Emma Roberts in 2011 at Coachella in 2011 and dated for nine months.

At the time, a source told Us Weekly that Overstreet was “so nice and was such a good boyfriend. . .He was always so sweet.”

Three months after their breakup, the lovebirds were spotted out at an Easter service and then at the Soho House in West Hollywood. They officially split in May of 2012.

His most recent fling was with Halston Sage, the Neighbors actress.

They began dating in January, but then it was reported that she was out with her latest co star, Zac Efron. 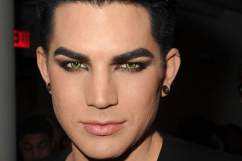