The late legend Michael Jackson is coming back for a performance at the Billboard Music Awards via hologram tonight, performing new music off of the recently released album “Xscape.” Along the way of creating this performance, there were a few hiccups, one of which was Alki David, who said he holds the rights to the hologram technology. TMZ reported:

Alki David, who says he controls the rights to the hologram technology, filed suit late Thursday against the Michael Jackson Estate, MJ’s production company and Dick Clark Productions … to stop them from showing a hologram of Michael using David’s technology. According to the suit, a life-size, projected 3D image of Michael will showcase a never-before-released Jackson song, “Slave to the Rhythm.”

Stay tuned for more coverage on the Michael Jackson performance of a lifetime.

See Michael like you’ve never seen him before! Tune in Sunday to @OfficialBBMAs on @ABCNetwork at 8 ET #MJXSCAPE pic.twitter.com/jDDbpHgFBY 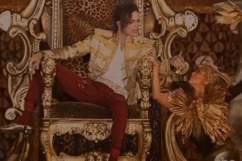