For his role as Rocky on Broadway, Andy Karl has earned a Best Actor nod at the 2014 Tony Awards.

The 39-year-old actor began his Broadway career in Saturday Night Fever, and went on to star in Legally Blonde and 9 to 5.

This new role is unlike any other on Broadway now, as Karl must sing, dance, act, and box for eight performances a week. His multi-talented portrayal of the “Italian Stallion” has earned him recognition in the theater industry.

Broadway.com put it best when they said, “Before the title character’s thrilling boxing match with Apollo Creed, Karl has already survived one onstage fight, delivered a song while doing pull-ups and jogged for 10 minutes after downing raw eggs.”

Let’s learn more about the actor.

1. Playing Rocky is His Big Break

Although he had been on the Broadway scene for years, this role is his first major one.

It was worth the wait, because Karl is deeply passionate about playing Rocky Balboa, opposite Margo Seibert as Adrian.

He called his character “the perfect blend of intimate scenes and spectacle, powerful music and script, nostalgia and something beautifully new.”

He told Broadway.com, “…I’m happy this is happening with a character I trust myself to be good at. There are some leading roles around town I would never want to play, but I feel very comfortable in this.”

2. He Met His Wife on Stage

The two starred in the Broadway version of Saturday Night Fever together. They dated for six months before getting engaged. A month later, they were married.

“She is definitely my real-life Adrian,” he said.

Since they are both in the acting business, they give each other advice:

And I totally trust her to give me feedback on Rocky because we have a wonderful working relationship. What’s great about us is that we are opposites in the way we look at certain things, so we can help each other see situations a different way.

3. He’s Getting Roughed Up

Although the boxing scenes are choreographed, the actors are getting actual blows to their bodies in the show’s two fight scenes.

“I’ve had a black eye, and during the first weeks of rehearsals I could barely move my neck. I’ve felt every pain that Rocky could possibly feel doing this show, but I’ve never missed a rehearsal,” he told Backstage.

Karl is known to take up to three or four showers a day “because of the nature of the blood sweat and tears of Rocky.”

The intense role is hard on his body and he’s noticing the side effects. ” My skin takes a beating and my hair is starting to resemble the texture of straw,” he told New York.

One of the Photos of the Week in the Enquirer #RockyBroadway pic.twitter.com/6lZOSRB3ni

At the show’s first-ever performance, Stallone surprised Karl-and the audience-by coming on stage at the finale.

As he stood in the ring at the Winter Garden Theatre, he told the crowd, “Actually I was born about nine blocks from here.”

In an interview Stallone did with Karl, he said, “I have such respect for Broadway. The expertise and the skill sets that you all possess, I’m very humbled by the whole thing.”

“I’m not gonna let you down, I promise, “Karl replied.

The man who originated the role of Rocky in the 1976 film, even made this promo video for the show:

To keep up with the physically demanding role, Karl has changed his diet and his workout routine.

For breakfast, besides eating oatmeal, he now includes supplements and vitamins.

As far as hitting the gym goes, he’s at Crunch every day at 9:30 for an hour to an hour and a half workout with a trainer.


I can’t believe I’m a gym-head now. I may not be Schwarzenegger, but I’m stronger than I’ve ever been. We’ll see how long it lasts. 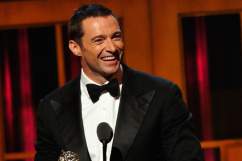